On Saturday 31 July, the world's most competitive GT race will begin its 73rd edition. This year's TotalEnergies 24 Hours of Spa will see nine brands represented on a 58-car grid, with each entrant vying to secure their place in history.

Whether you're a first-timer or a long-term fan, endurance racing can seem complicated: there are multiple classes, maximum stint lengths and mandatory pit stops to keep track of. But fear not, because we have assembled the key information that you need to know ahead of this year's TotalEnergies 24 Hours of Spa.

One of Spa's unique features is that its class structure is based solely on driver categorisation. There will be four categories on-track this year, with every car conforming to GT3 regulations. Crews competing in Pro are only eligible for the overall result, while those in the Silver Cup, Pro-Am and Am Cup also compete for class honours.

First, it's worth mentioning a few rules that are applicable to all classes. Over the full duration of the race, no driver can spend more than 14 hours behind the wheel. The maximum continuous driving time is three hours, after which there is a mandatory one-hour rest.

The Pro category is the biggest, with 25 cars committed for 2021. Each crew is limited to three drivers, but there are no additional rules on driving time nor on categorisation. Barring a major upset, this category will fill the overall podium on Sunday afternoon, as it has every year since the current class structure was introduced in 2011.

In the Silver Cup each line-up consists of up to four Silver-graded drivers, with no extra limits placed on driving time. We'll see 17 entries this year, the most since the class was introduced in 2018. To date the best finish for a Silver crew is 15th, but we could certainly see that beaten in 2021.

In Pro-Am, a maximum line-up of two Platinum and two Bronze-graded drivers is allowed. In terms of driving time, this is the most complex: a Bronze must be behind the wheel for a minimum of eight hours during the race, and for at least one hour during each six-hour period (this time can be shared between two Bronze representatives). There are 14 runners confirmed, the most since 2017.

Am Cup crews consist of up to four Bronze drivers, or three Bronze and one Silver. The Silver can only be behind the wheel for a total of six hours during the race, and for a maximum of two hours in each six-hour period. There are two Am crews confirmed for 2021, both of which have elected to run the optional Silver driver. 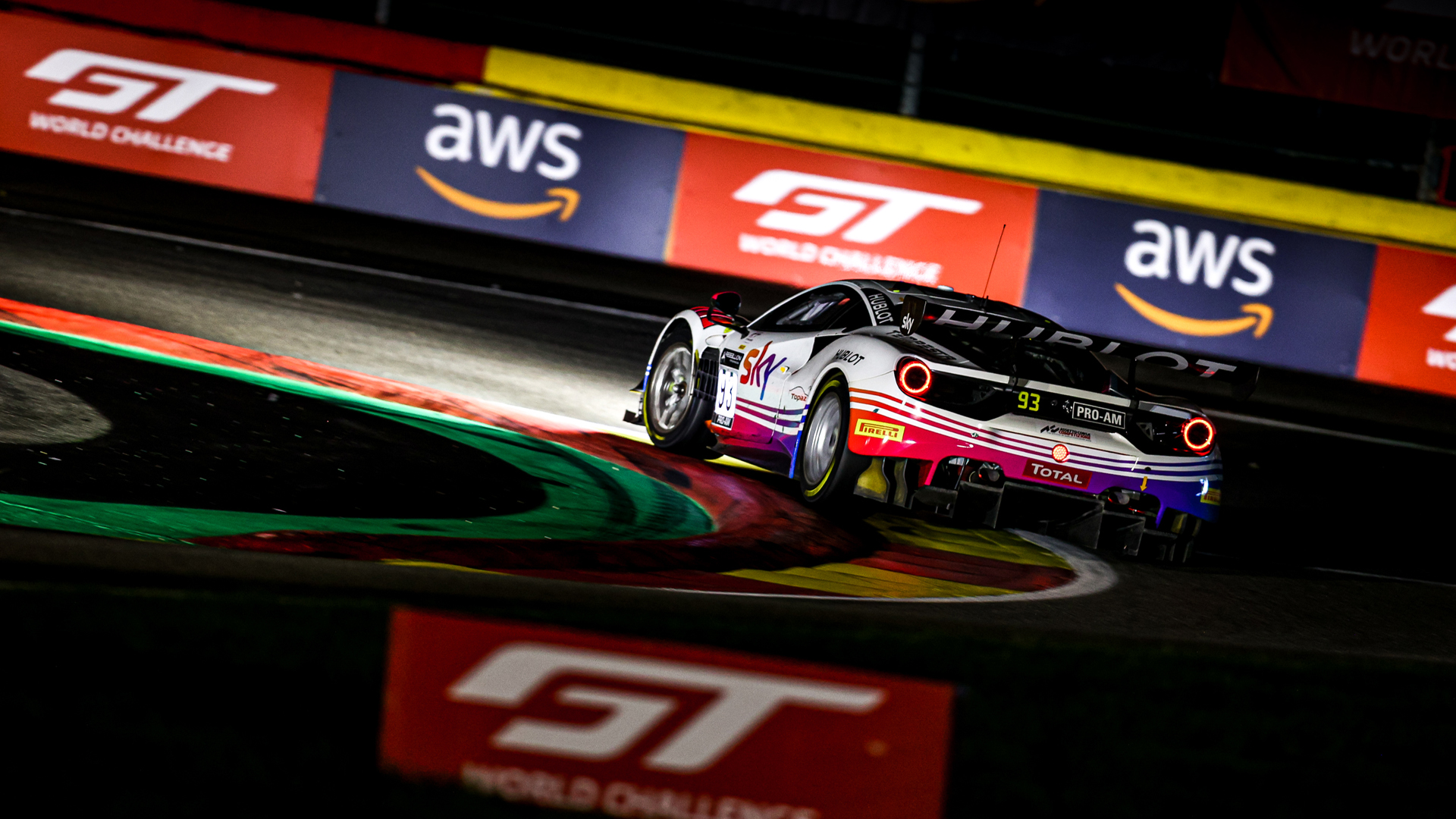 The 2021 TotalEnergies 24 Hours of Spa will be the third round of the Fanatec GT World Challenge Europe Powered by AWS Endurance Cup, as well as the opening stop on the Intercontinental GT Challenge Powered by Pirelli tour. However, it’s bigger than a regular Endurance Cup event. Track activity begins at 14:55 on Tuesday with the Bronze Test, which runs for three hours and is open to all Bronze-graded competitors, as well as any Silver drivers competing outside the Pro category who have never previously raced at Spa.

Things get very busy on Thursday. Track action kick offs with a 90-minute Free Practice at 10:50 followed by a one-hour Pre-Qualifying at 15:45. Both are primarily about preparation, while Pre-Qualifying can also be used to set the grid if Qualifying can’t take place.

All being well we move on to Qualifying at 20:50. This follows the usual Endurance Cup format, though there are four 15-minute sessions instead of three. One driver from each car contests a session, with three-driver crews skipping Q1 and the average time establishing the order. The fastest 20 book a spot in Friday's Super Pole shootout, while positions 21 through 58 locked in barring any penalties.

At this point attention begins to shift to the race with a 90-minute Night Practice that runs from 22:30 until midnight. All drivers must complete at least two flying lap laps (from timing line to timing line) to meet their night-driving criteria.

Friday begins with a 20-minute Warm-Up at 19:10, which is open to all competitors. For those contesting Super Pole, it's an opportunity for a quick shakedown; for the remainder of the field, this is the last chance to run before the main event.

At 19:50 the Super Pole battle begins. Each crew nominates one driver, who has two flying laps to set their best time. They run in reverse order and at one-minute intervals, meaning the excitement builds throughout the session. Winning the Super Pole at the TotalEnergies 24 Hours of Spa is a major mark of respect for every GT driver.

During the race, you will often hear commentators talk about a stint. Put simply, this is the continuous time that a car spends on-track: the clock begins upon leaving the pits and is reset when the car returns. The maximum stint length at Spa is 65 minutes, unless a full-course yellow or safety car period is in operation when the stint finishes. In this case, an additional five minutes is allowed to return to the pits at a slower speed.

Pit stops are crucial in endurance racing and there will be hundreds performed throughout the 24 Hours. For standard stops, there is a minimum refuelling time during which the car must remain connected to the rig. Tyre and driver changes can take place during refuelling, but they are optional. A one-second tolerance on pit stop time is permitted on four occasions during the course of the race.

Short refuelling stops are also allowed. For these, a maximum refuelling time will be determined and can differ between brands, so some cars may need to complete a ‘stop and hold’. There is no tolerance on short pit stops, so it is essential that teams get them right.

Additionally, each car must perform a technical pit stop, lasting at least four minutes from pit-in to pit-out, between the start of the 12th hour and end of the 22nd hour. This is to allow teams to change items such as brake pads, a task that can be performed much quicker on some cars than others.

As sole tyre supplier to a field of 58 cars, the TotalEnergies 24 Hours of Spa is a huge undertaking for Pirelli. The Italian company produces up to 13,000 tyres for the race, sending around 35 trucks and a huge army of support staff to the Ardennes.

They provide each car with a maximum of 30 sets of dry tyres, which must be used from free practice onwards. Two sets from the official test day can be carried over as part of the 30-set allocation, while an additional set is authorised for the cars taking part in Super Pole. These can’t be used during the race, so there's no excuse not to push them to the limit.

Of course, we know just how big a part the weather can play at Spa. Rain is always a possibility, even if the sun is shining and there's not a cloud in sight.  The good news here is that there is no limit on the use of Pirelli's wet compound tyre, ensuring that all cars can be on the right rubber for the conditions. 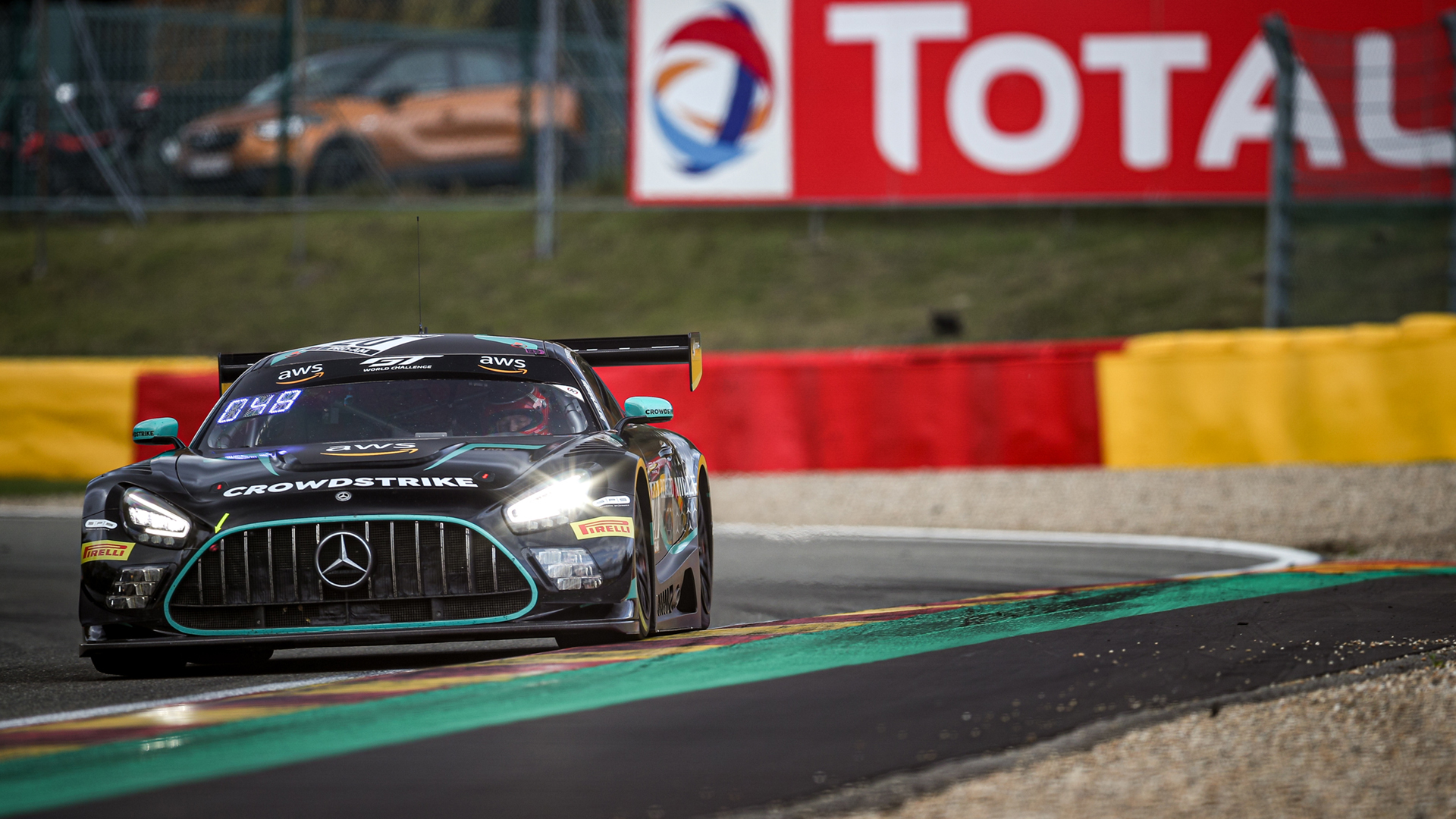 With extra points on offer, the TotalEnergies 24 Hours of Spa can make or break a championship bid. As in all Endurance Cup events, one point is awarded to the team and drivers on pole overall and in the classes. In a new addition for this year, the Fanatec Esports GT Pro Series will award overall and Silver Cup teams’ championships points on a 3-2-1 basis for a one-hour Assetto Corsa Competizione race, which takes place on Friday in the on-site Fanatec Esports Arena.

Spa's unique feature is that points are awarded to the top nine runners in each category after six and 12 hours of the race on a basis of 12, 9, 7, 6, 5, 4, 3, 2, 1. As ever, full points are awarded to the top-10 at the chequered flag using the standard 25-18-15 format. Teams that have not entered one of this season's Fanatec GT World Challenge Europe Powered by AWS races are ineligible to earn points, but their drivers can score.

Spa will also represent the opening round of Intercontinental GT Challenge Powered by Pirelli.  Competing manufacturers nominate up to six cars, a maximum of four from the Pro category, which can score points towards the 2021 championship. The season continues with the Indianapolis 8 Hour Powered by AWS (15-17 October) and the Kyalami 9 Hour (2-4 December).

What’s more, the event is the biggest points-scoring opportunity for the global Fanatec GT World Challenge Powered by AWS. All seven eligible brands will be represented, with points awarded at the end of the race in each class and multiplied by the number of entries.

Last but not least, the Coupe du Roi rewards the manufacturer that scores the best result across the classes, with points awarded per car at six, 12 and 24 hours. Lamborghini picked up the trophy last year, when its greatest success was Pro-Am victory for the #77 Barwell Motorsports car. Previously, Mercedes-AMG had taken the Coupe du Roi in successive years.

With this information at hand, you are fully up to speed for the 2021 TotalEnergies 24 Hours of Spa. The race will once again enjoy extensive live coverage via a host of online options, allowing fans to experience the action via free-to-view, non-geo-blocked streams featuring either French or English commentary. These will be available through the usual variety of platforms, including the event's official website and Facebook page and on the GT World YouTube channels.