Pryde charged to a Round 1 victory at Kyalami in his PPR Esports Porsche 911 GT3 R, automatically securing a spot in the field for Donnington along with the rest of the top five finishers. The top ten in last season's points standings also earned automatic invitations along with the Honda JAS Pro America esports team, with the remainder of the positions open to the fastest North American sim racers in time trials competition.

Newcomer Samuel Gardiner impressed by setting the fastest qualifying lap of those in the field in his privately entered BMW M6 GT3, eclipsing the one minute, 26 second threshold with a best lap of 1:25.953. He is joined in the BMW camp by Season 2 veterans Philippe Simard of R&K Racing and Caleb Lavendar's private entry, along with hot lap qualifier Caique Oliveira from the Corinthians Breadking BMW squad.

Aston Martin is well represented by Black Hawk Racing's Chris Severt, a fifth place finisher in the season opener, along with Jabba Racing's Steven Daniluk who finished 12th at Kyalami. Nicolas Alvarado (New World Sim Racing) sampled multiple cars in qualifying before settling on the Aston Martin Vantage AMR GT3, while Alexis Moisan will make a season debut this week in the car.

TSE Racing teammates Vadim Molla and Zachary Kunin are back in their Bentley Continental GT3 machines after a trying opening round and will be joined by a pair of Pass on da Grass drivers who made their way into the field based on qualifying: Michael Fritz and Roman Cahill.

Acura once again is represented exclusively by its HPD JAS Pro America lineup of sim-racers Cardin Lu, Josh Staffin and Zach Patterson, the latter of whom finished ninth in Round 1, along with real-world SRO America driver Karl Wittmer in its three Honda NSX GT3 Evo entries.

Three veterans of the Kyalami race are back in the Lamborghini fold with Zach Etier (RacingSimTools eSports), Ryan Woodrow (FlashPointEsports), and Brian Kannappan (Team Fordzilla) all entered in Lamborghini Huracan GT3 Evos. Kannappan notched the best result of the trio in South Africa with a 15th-place result. A fourth Lamborghini will be piloted by Jake Langevin out of the Pass on da Grass stable.

Lexus is in a similar position seeking its first Top 10 of the season with three returning drivers: Taha Malih (H3 Racing), Joseph Kostovich (Nine 4 Nine Racing), and Thomas Lavoie (EGT Motorsport). Bolstering their ranks for Donnington is Madhaus Racing driver Quin Smith who is set for his season debut.

William Hendrickson (Jean Alesi eSports Academy) is back in a Mercedes-AMG GT3 Evo and aiming to repeat his podium run from last month, while Pierre-Olivier Cloutier (EGT Motorsport) and Adrien Bourdon (SOP Esports Racing) hope to rebound from a difficult opening race. The fourth Mercedes driver this month is Mark DeBoer in a privately-entered car.

The Porsche camp, meanwhile, boasts five cars including the Round 1 winner and championship points leader Cody Pryde (PPR Esports). The rest of the Porsche crew struggled at Kyalami with Carl Matthes (KOMP Racing) finishing 19th, Matt Santiago (Turn1 Pro) finishing 30th, and Chris Bruno (CMS Pro) finishing 40th. Those four are back and will be joined by RacingSimTools eSports driver Szymon Salamon for this month's race.

The lone Nissan GT-R Nismo GT3 belongs to Season 1 champion Bryan Heitkotter who seeks to improve on an 18th-place run at Kyalami in Round 2 of the eight-round season which consists of five 60-minute sprint events and three more endurance races of durations lasting three, six and 12 hours.

In the Sprint races, a mandatory pitstop featuring at least one liter of fuel must be served between minutes 25 and 35. Changing tires is not required but will provide a noticeable performance advantage, albeit with the caveat of remaining stationary for longer. 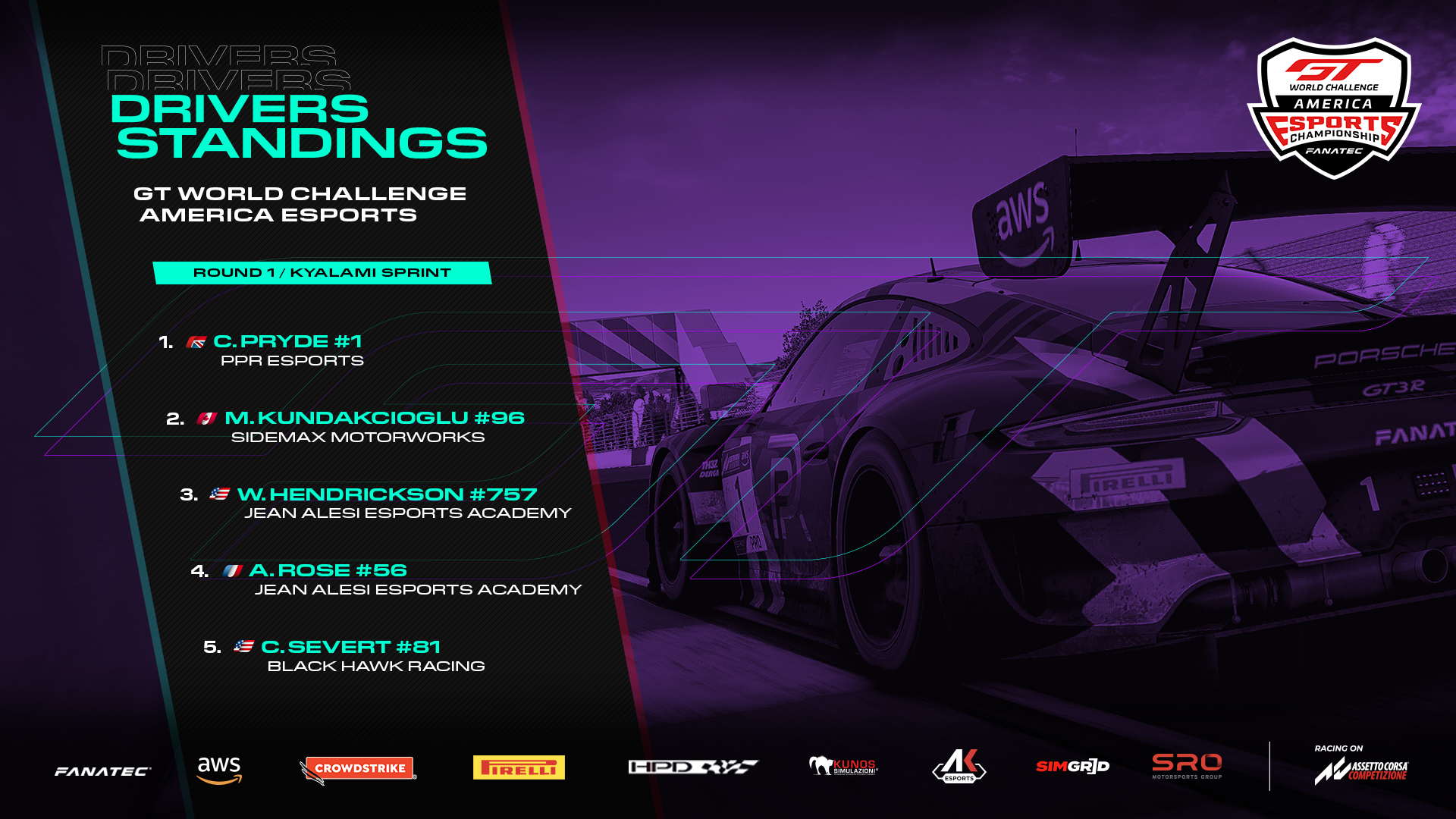