That was the tally for CrowdStrike Racing in SRO America competition at Road America – the team’s biggest single-weekend collection of hardware in GT World Challenge Powered by AWS and Touring Car America.

For the first time in its SRO America career, CrowdStrike Racing won races across multiple categories on the same weekend. George Kurtz and Colin Braun were victorious for the second time this season in the GT World Challenge America Pro-Am category with their No. 04 CrowdStrike/AWS/DXDT Racing Mercedes-AMG GT3. In the process, the two regained the Driver’s Championship lead, again by a single point.

In Touring Car America, CrowdStrike Racing’s Kevin Boehm stole the show with not just his first TCA victory in the No. 9 CrowdStrike/AWS/DXDT Honda Performance Development Civic Si but his second one a day later to go along with a runner-up finish, as well. It follows on what had been his season-best outing at Sonoma with a second-place finish to close out that weekend and firmly entrench himself in the TCA Championship.

Not to be outdone, CJ Moses took his place on the podium in the TCR ranks with his No. 04 CrowdStrike/AWS/DXDT HPD Civic Type R TCR in Saturday’s race. All in all, it was a great weekend for CrowdStrike, which continues to establish itself as a leader on the track and off it, as evidenced by its position as Official Internet and Cloud Security Partner of GT World Challenge America Powered by AWS.

That leadership will be on display again when SRO America returns to Circuit of The Americas for CrowdStrike Racing’s next event in September. 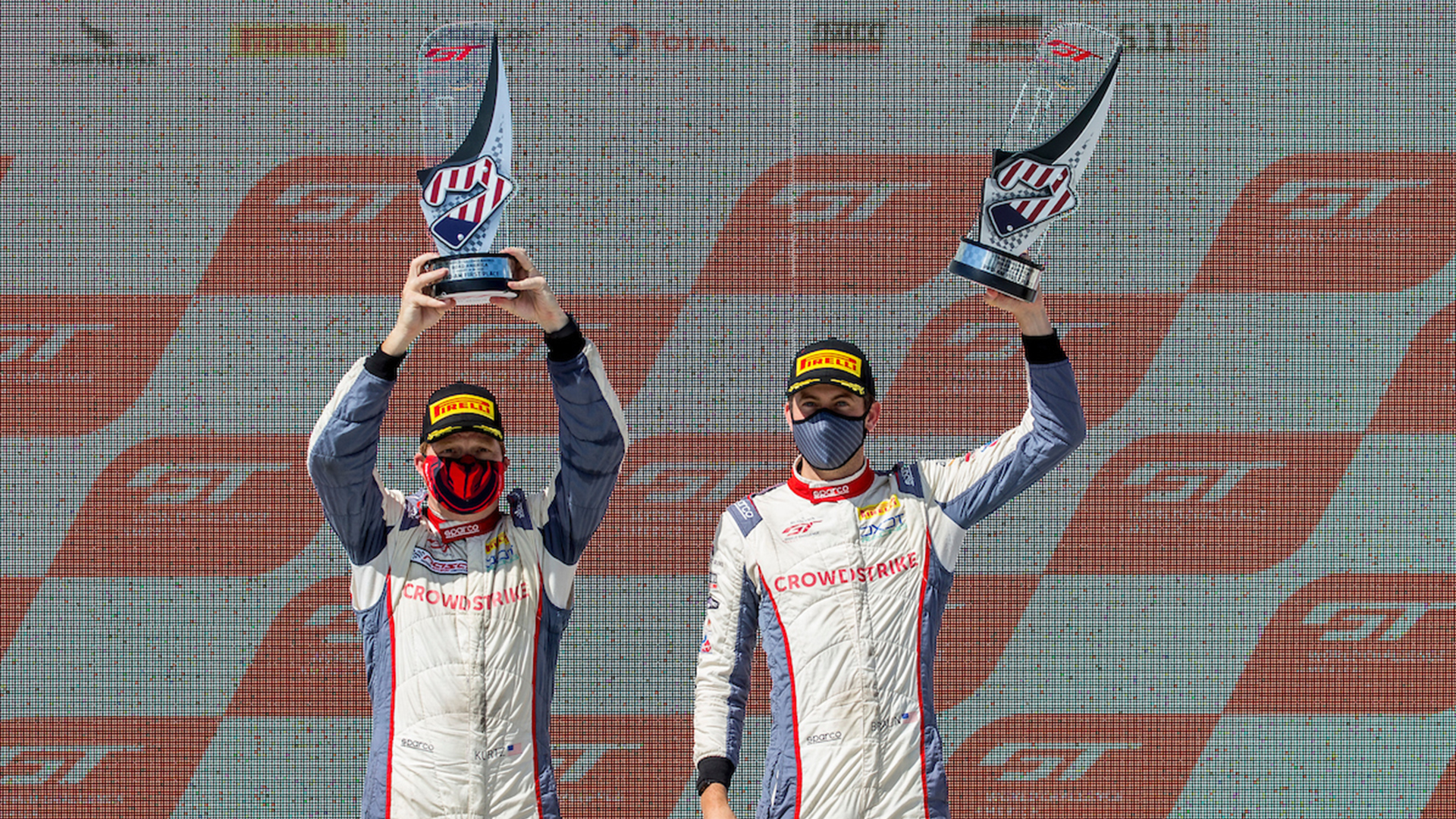 Kurtz and Braun affirmed their status as top contenders for the GT World Challenge America Pro-Am Driver’s Championship with their second victory of the season in the No. 04 CrowdStrike/AWS/DXDT Mercedes-AMG GT3. The pair scored a 3.532-second class victory over their DXDT Racing teammates Ryan Dalziel and David Askew in a Mercedes-AMG 1-2 finish.

It was a stark contrast to Saturday’s result for the No. 04 CrowdStrike/AWS Mercedes, which was damaged in an early-race incident.

Braun began Sunday’s 90-minute race second and ran third until making the mandatory pit stop for a driver change, fuel and new tires with 38 minutes left. The pit stop execution was spot on with Kurtz moving into the lead after the pit stop.

"The team did a great job recovering from yesterday,” Kurtz said. “It obviously was disappointing, but our focus was on today. The Mercedes-AMG GT3 was in great shape and handled well. Colin did a great job, our crew executed on our pit stop and everything worked out. There was a lot of activity so the goal was to drive a smart race and keep it clean knowing that we have a championship on the line. I was able to bring it back in first."

Saturday’s challenge for the Kurtz/Braun pairing was over shortly after it began. Kurtz began second in class but was bumped by another Mercedes-AMG GT3 entry on the long run to the first corner.

"Overall, this was a really good weekend for us. I'm super happy to get the win for CrowdStrike, DXDT and Mercedes,” Braun said. “George drove a fantastic stint on Sunday and was really smart in the traffic and all the different conditions that he had to deal with to get the win. I'm super proud of him and his efforts. Obviously it was a disappointing day on Saturday but the guys worked really hard to get the car fixed back up. To come back Sunday and win the race shows the strength of this team, how hard they work and how determined they are. It's a pleasure to drive for them."

CrowdStrike Racing didn’t have to wait long for its first victory on the weekend as Boehm claimed his first win in TC America competition in the CrowdStrike/AWS/DXDT HPD Civic Si on Friday afternoon.

It followed his first pole position in the series earlier in the day, and Boehm led the entire 40 minutes. The race featured two full-course cautions including one to bring it to an end.

Saturday’s race saw Boehm begin second in TCA, but he took the lead on the opening lap just before a full-course yellow that involved Moses. The race began again with 29 minutes to go, and this time Boehm had to defend the lead under green to the end and eventually won by more than 11 seconds.

Sunday’s race saw Boehm make every move and every second count. An opening-lap crash for Touring Car competitors moved him back to sixth in class for a restart, but the No. 9 CrowdStrike/AWS HPD sliced its way back through the field. Boehm was third by the fourth lap and 10 minutes later was second but nearly four seconds from the lead.  A late-race charge came up just 0.8 seconds short but did nothing to take away from the team’s accomplishments for the weekend, which saw him move up to third in the TCA Driver’s Championship – just seven points away from first place.

“What an unbelievable weekend. I’m so proud for everyone who is part of this CrowdStrike/AWS/DXDT HPD Civic Si program,” Boehm said. “This result has been a long time coming. I felt like we have been on the verge of breaking through, as we showed at Sonoma. The CrowdStrike/AWS Civic was dialed in all weekend. It feels great to get these two wins and a runner-up, and we were happy to share the success with two beneficiaries from Operation Motorsport as honorary crew. I’m ready to keep up the momentum and get back to COTA.”

Moses joined his Touring Car teammate on the TC America podium Saturday with his second TCR podium finish in three races with the No. 04 CrowdStrike/AWS/DXDT HPD Civic Type R TCR. That result came despite being involved in a first-lap incident when another car spun in front of him, and Moses had nowhere to go.

Grit and perseverance allowed Moses to drive back through the field after losing track position. He crossed the finish line third in class with less than 10 minutes left.

It went along with a solid fifth-place finish the day before, and he closed the weekend with a similar result during Sunday’s hectic race.

“Everything about this weekend reminds me why I enjoy Road America so much,” Moses said. Overall the weekend was a big success. Congratulations to my teammate Kevin on an incredible weekend with two wins and a runner-up. I got faster and faster with each session and each race. Getting that experience lap after lap has been really key the last three events since racing returned. The CrowdStrike/AWS/DXD HPD Civic Type R TCR was on-point all weekend and was great to drive. I’m looking forward to doing some testing before we go make our return to COTA.”

They are two of the many veterans whom Operation Motorsport has helped transition into new careers following their military service. Operation Motorsport is a veteran-led and operated, not-for-profit (US 501(c)(3)) that serves American & Canadian service members and veterans, and was founded on the basis of three simple words: Excite, Engage and Empower.

The premise is to engage ill and injured service members and veterans affected by military service, through motorsport activities and opportunities to aid in their recovery and rehabilitation. Operation Motorsport provides a chance for veterans to use their skill sets in a variety of areas including paddock operations, car and tire prep, marketing, social media and other key areas that are part of a racing program.

CrowdStrike Racing’s next event is a return to Circuit of The Americas from Sept. 17-20. Find more information and the complete 2020 race schedule at crowdstrikeracing.com.