ELKHART LAKE, Wisconsin. Mercedes-AMG Motorsport Customer Racing teams across two SRO Motorsports Group America racing series secured a pair of poles, two class victories and a top-two Pro-Am podium sweep in a successful weekend of competition at Road America. The two-car Mercedes-AMG GT3 DXDT Racing team rebounded from a challenging race Saturday to sweep the Pro-Am class top-two in Sunday’s final 90-minute race of the weekend. George Kurtz and Colin Braun co-drove the No. 04 Mercedes-AMG GT3 to their second victory of the season. The winners were followed across the finish by the second-place No. 63 DXDT Racing Mercedes-AMG GT3 of David Askew and Ryan Dalziel.

In second round qualifying for Sunday’s race, Dalziel stepped up to claim his first pole of the season in the No. 63 DXDT Mercedes-AMG GT3.

The start of Saturday’s race was a tight sprint into turn one. As Dontje led the field into the fast-right-hand turn, DXDT teammates Kurtz and Askew had slight contact and spun off course.

Both DXDT cars continued in the race but were never able to work their way back into contention for the victory.

Meanwhile, Dontje and Ward co-drove to a second place overall and Silver-class finish in the No. 33.

Kurtz and Braun completed the overall podium in third on Sunday in addition to the Pro-Am victory, their second of the season after first winning at VIRginia International Raceway (VIR) in July. Kurtz also set the fastest Pro-Am race lap on Sunday.

Askew and Dalziel were a season-best fourth overall and second in Pro-Am Sunday in the No. 63.

The SRO GT World Challenge America and Pirelli GT4 America series return to action at Circuit of The Americas (COTA) in Texas, September 18 – 20. 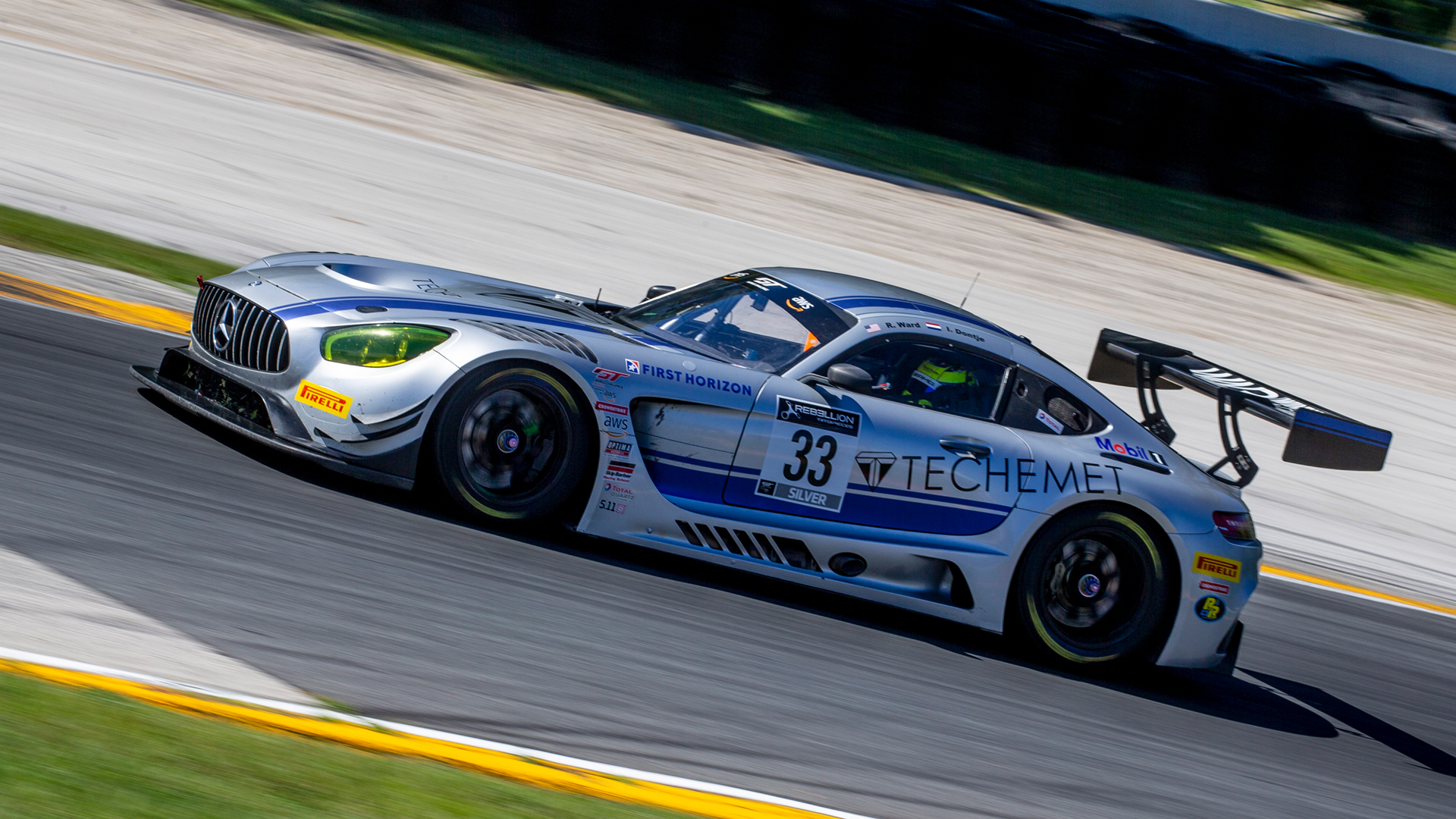 George Kurtz, Driver – No. 04 DXDT Racing Mercedes-AMG GT3: “The team did a great job recovering from Saturday. It obviously was disappointing, but our focus was on Sunday. Our Mercedes-AMG GT3 was in great shape and handled well. Colin did a great job, our crew executed on our pit stop and everything worked out. There was a lot of activity, so the goal was to drive a smart race and keep it clean, knowing that we have a championship on the line. I was able to bring it back in first."

Colin Braun, Driver – No. 04 DXDT Racing Mercedes-AMG GT3: “Overall, this was a really good weekend for us. I'm super happy to get the win for DXDT Racing and Mercedes-AMG. George drove a fantastic stint on Sunday and was really smart in the traffic and all the different conditions that he had to deal with to get the win. I am proud of him and his efforts. Obviously, it was a disappointing day on Saturday, but the guys worked really hard to get the car fixed back up. To come back Sunday and win the race shows the strength of this team, how hard they work and how determined they are. It's a pleasure to drive for them.”

David Askew, Driver – No. 63 DXDT Racing Mercedes-AMG GT3: “As a team owner, I’m thrilled with a one-two finish. You couldn’t ask for more than that. What a recovery from Saturday. It was kind of a mess with the two team cars taking each other out of contention for first, but what a comeback. As a driver, I am never happy with second, but George is my teammate, he passed me fair and won.”

Ryan Dalziel, Driver – No. 63 DXDT Racing Mercedes-AMG GT3: “David had a great stint. The last few races, we have really been knocking on the door of this. Not the start that we wanted. You work hard to get pole positions, and they are meant to mean something, the second-place car was clearly ahead of me and jumped me. That’s my take on it.”

Russell Ward, Driver – No. 33 Winward Racing Mercedes-AMG GT3: “There’s only one position up to improve on what we did this weekend. It’s awesome to be back with Indy. I have driven with him for a couple of years. He has kind of been involved driving with me from the first time I ever drove the Mercedes-AMG GT4 in the 24 Hours of COTA back in 2017. It’s always a pleasure to drive with him, he’s as fast as a jet, he does a good job and helps bring me up to speed.”

Indy Dontje, Driver – No. 33 Winward Racing Mercedes-AMG GT3: “For us, it was good training for the team this weekend, for Russell to get familiar with the Mercedes-AMG GT3. I think we showed our potential as a team. A pole position and fastest race lap is really good. Russell did a great job showing his potential compared to these pro drivers. We are going to keep it this way, it was unfortunate there was one car too far away in the lead, but at the end I was quick, and I was happy with my performance in race two. Hopefully, I will be back soon.”