The 90-minute race was contested under sunny and hot 87-degree Fahrenheit weather conditions. From pole, Hindman, in the #93 Acura NSX GT3 launched successfully and into the lead while Braun, in the #04 Mercedes-AMG GT3 slotted into second. Bleekemolen, in the #14 Porsche 911 GT3 R (991) followed in third. Root in the #20 Porsche 911 GT3 R (991.II) was able to slide under Rodrigo Baptista in the #1 Ferrari 488 GT3 to slot into fourth.

Over the next number of laps, Hindman would build a 4.9 second lead over Braun. Behind the leaders a battle for fifth raged with Baptista, TR3 Racing's Jeff Segal in the #24 Ferrari 488 GT3, and Dalziel in the #63 Mercedes-AMG GT3. 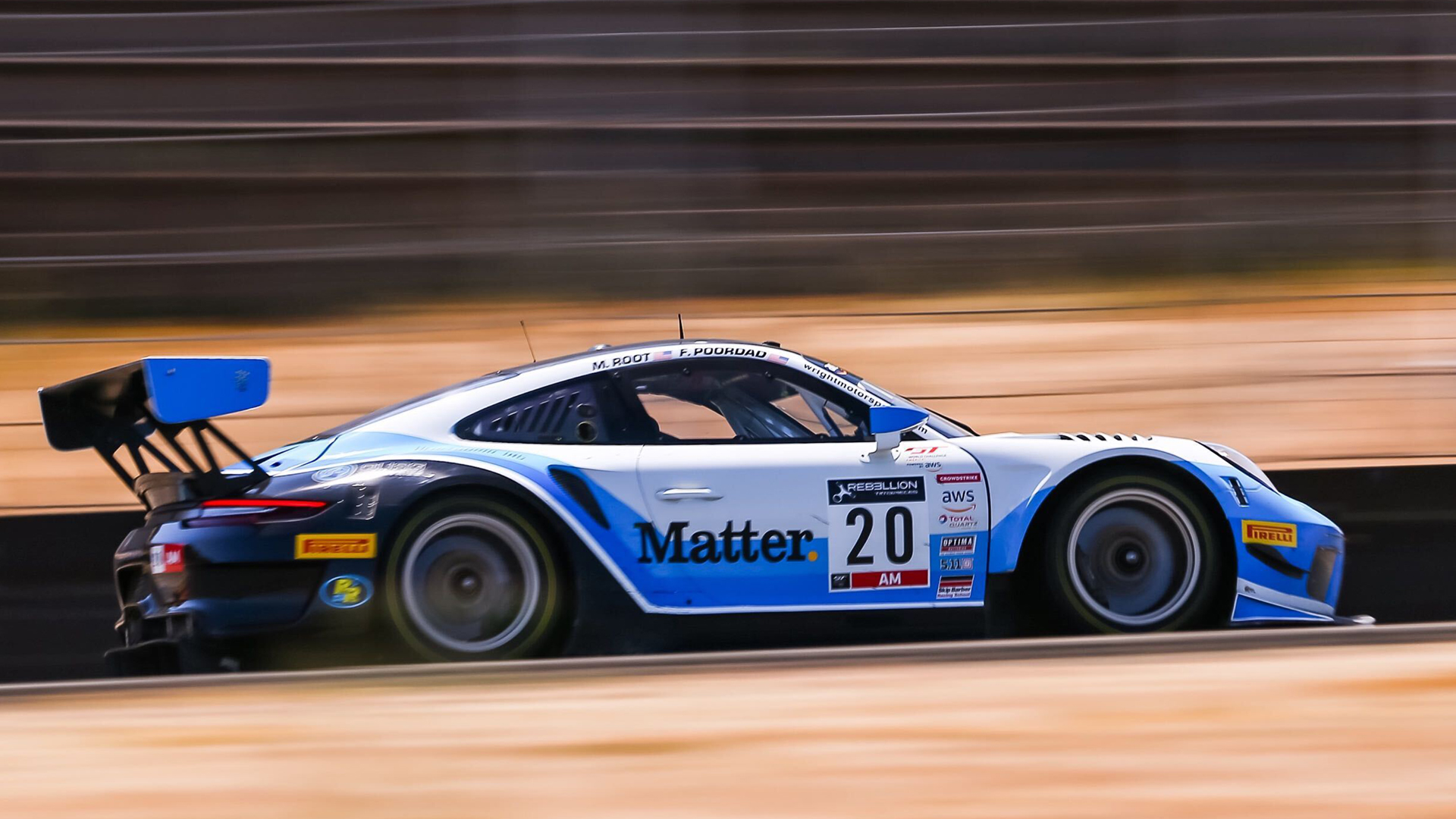 A full-course yellow then ensued as two GT Sports Club competitors (the GT Sports Club race ran concurrent with the GT World Challenge race) came together through turn 3. After the cleanup, the race restarted on lap 14, and Hindman again launched successfully back into the lead, with Braun, Bleekemolen, Root, Baptista, Segal and Dalziel maintaining their positions.

At the 35-minute mark of the race and the pit window open, Hindman who had built his lead back up to six seconds, came into the pits first to changeover to Blackstock. Bleekemolen, Root, Baptista and Segal all followed, while Braun and Dalziel looking to make up valuable seconds elected to stay out and came in right before the pit window closed. The Squadra Corse Ferrari team were able to execute a cleaner pit stop and Martin Fuentes who took over the reins for Baptista exited pit road ahead of Sofronas now behind the wheel of the GMG Racing Porsche.

With the pit window closed, the Racer's Edge Motorsports Acura team still held the lead with Blackstock out front by 8.7 seconds. Kurtz now behind the wheel of the #04 Mercedes-AMG GT3 ran in second, while Poordad sat third after taking over for Root. Fuentes and Sofronas then engaged in a heated battle for fourth that lasted the balance of the race. Dramatics ensued shortly after the pit window closed as race officials issued a drive through penalty to the #04 machine for a pit lane speed violation on the driver changeover. Kurtz would come into pit lane dropping him from second to 7th, moving Poordad up into second overall. By lap 35, Fuentes and Sofronas had caught Poordad and the three competitors then engaged in a late race battle. With Fuentes looking for a way around Poordad, Sofronas waited in the wings looking to pounce on any mistake make by the two competitors ahead of him. Then on lap 46, Fuentes' Ferrari looked to encounter a right front suspension problem and the #1 machine ran wide off into a runoff area through the carousel section and turn 6. Sofronas moved into third. Fuentes would bring his machine around and into the pits ending his day. The focus then shifted to the battle for third in Pro/Am shifted to Ghandour, who had taken over for Segal, and Kurtz who had rebounded after serving the drive through penalty. 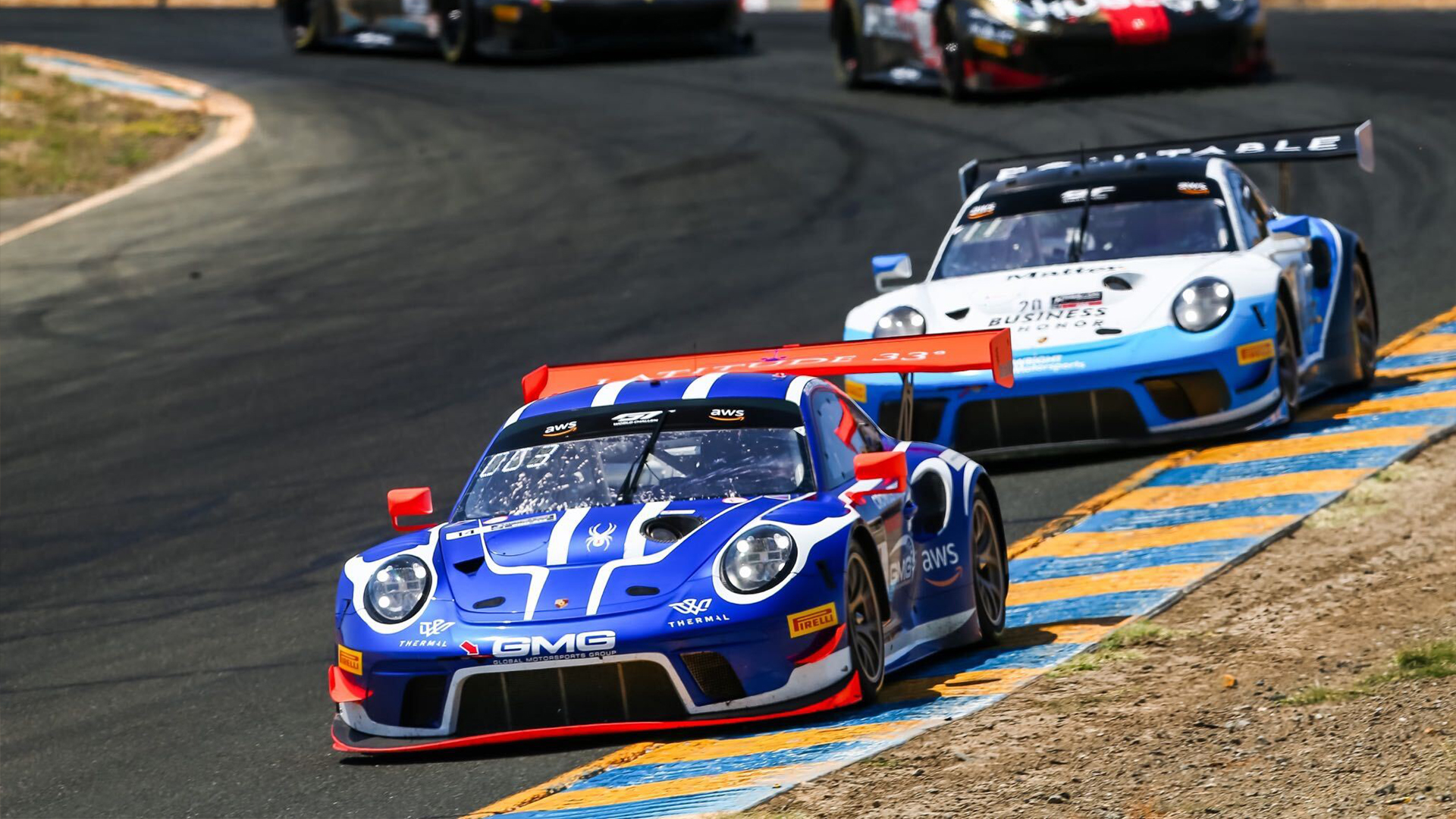 On the white flag lap, Ghandour would power slide coming off the bottom of the turn 6 carousel opening the door for Kurtz who slid by. But Ghandour fought back and attempted to push under Kurtz for position through turn 7. The machines came together with Kurtz's #04 spinning and Ghandour's #24 Ferrari continuing on. Ghandour crossed the line ahead of Kurtz, but immediately after the checkered, officials awarded the fifth overall and third in Pro/Am spot back to Kurtz/Dalziel.

"I am really proud to be part of this Racer's Edge Motorsports crew," said Hindman. "They gave us a fantastic Acura NSX GT3 and Shelby did a hell of a job in the race and with the qualifying."

"It was a great run today," said Poordad. "After Max's (Root) first stint I had to live up to that challenge because he got us into a great position. It was all I could do to hold those guys (Fuentes and Sofronas) off and I am very pleased with the outcome."