Championship points leader and pole sitter Vilander led the field to the green in his #61 R. Ferri Motorsport Ferrari 488 GT3 and drag raced down the front straight with second-on-the-grid Maxime Soulet in the #3 K-PAX Racing Bentley Continental GT3. Soulet was able to nose ahead and take the lead through turn 1. Cameron, driving the #43 RealTime Racing Acura NSX slotted in behind Vilander in third.

Drama ensued as the leaders headed to turn 8 on the first lap. Vilander was able to get underneath Soulet as the two entered the right hander and the two contacted with Soulet’s Bentley spinning and Vilander continuing through into the lead. Soulet gathered his #3 machine and re-entered the track but not before a substantial number of competitors had passed.

At the completion of lap 1, Vilander led Cameron and Pro/Am driver Kyle Marcelli in the #80 Racers Edge Motorsports Acura NSX. Fuentes, driving the #7 Squadra Corse Ferrari 488 GT3 slotted in 12th overall and tops in the Am division. By lap 3, Pro division pilot Scott Hargrove in the #58 Wright Motorsports Porsche 911 GT3 R was on a charge moving up four positions to slot into fourth overall behind Marcelli.

Through lap 20 the leaders in all categories held their positions with Vilander growing his overall lead over Cameron by over two seconds.

At the 50-minute mark of the race the pit lane opened for driver changes and Soulet brought his #3 machine in first to change over to partner Rodrigo Baptista. K-PAX Racing’s second entry with Andy Soucek behind the wheel of the #9 Bentley Continental GT3 came in shortly after for Alvaro Parente to assume the reins. Vilander and Hargrove brought their cars in a lap later to change over to Serra and Patrick Long respectively. Cameron and Marcelli stayed out on track until near the close of the pit window when both came in to change over to partners Hedlund and Martin Barkey respectively. 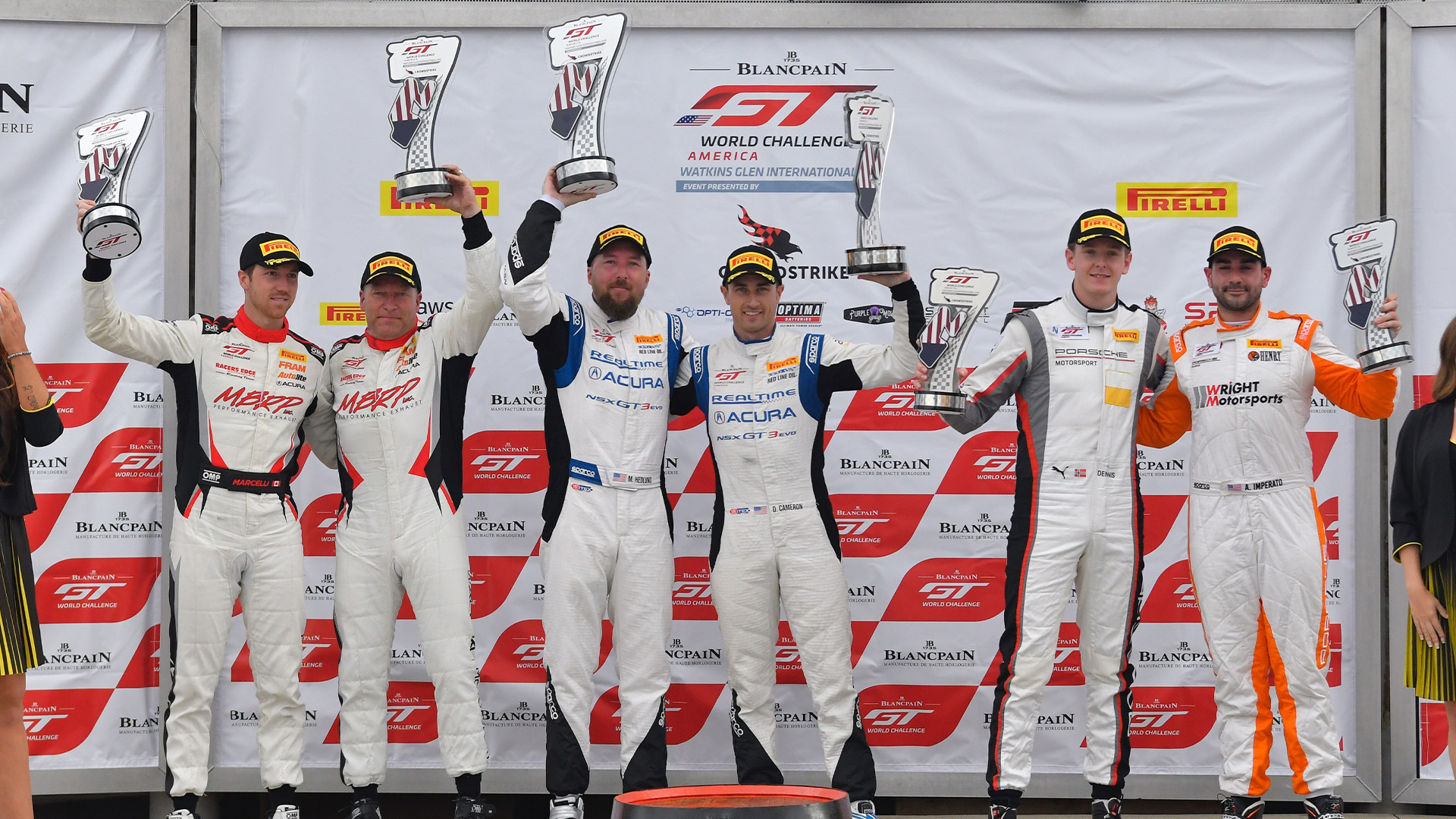 By lap 30 with the pit window closed, and driver changes completed, Hedlund held the overall lead and top spot in the Pro/Am division with Serra, Parente and Long in pursuit. Issa who had taken over for Fuentes slotted into 13th overall maintaining the lead in Am.

By lap 31, the top three dueled for position with Hedlund defending the lead over Serra and Parente looking for a way around the Ferrari driver for second. Then on lap 33, Serra squeezed by Hedlund for the lead through turns 8 and 9 with Parente following into second. That set up a 28-minute duel to the checkered between the Ferrari and Bentley drivers. Long then made it a Ferrari, Bentley and Porsche duel passing Hedlund on lap 34. By lap 39 the leaders began to encounter lap traffic closing the gap between the top three and bringing Baptista, who had passed Hedlund, into the picture in fourth. Serra effectively managed lap traffic and was able to hold off any challenges from Parente extending his gap in front, while on lap 41 Baptista passed Long through the bus stop complex moving into third overall. Hedlund remained in 5th overall leading in Pro/Am, while Issa maintained his 13th overall position leading in Am.

By Lap 42, Serra had cleared lap traffic and increased his gap over Parente to .800 seconds. Parente was unable to close the gap back up and at the checkered, the Ferrari driver crossed the line ahead of the Bentley driver by 3.99 seconds, with Baptista, Long and Hedlund closing out the top five. Barkey (Marcelli) crossed the line 7th overall and second in Pro/Am, ahead of Wright Motorsports driver Anthony Imperato (Dennis Olsen) in the #91 Porsche 911 GT3 R. Issa (Fuentes) finished 13th overall ahead of fellow Am competitor Christopher Cagnazzi (Anthony Lazzaro) in the #19 One11 Competition Ferrari 488 GT3 and Naoto Takeda (Takuya Shirasaka) in the #96 Turner Motorsport BMW F13 M6 GT3.

“What was supposed to be an easy stint for me became like qualifying every lap,” said Serra. “We lost a bit of time on the pit stop and when I got back out, I was behind Hedlund. It was difficult to overtake him because he had much more speed than us on the straight, even when I was in the draft. I had to wait for a mistake or something like that and in turn 8 he went wide and I was able to overtake him. I was pushing and couldn't put a gap to Parente. It was a nice stint, it's good to come here and help the team and Toni (Vilander) extend the lead so I'm satisfied.”

“It was a more exciting race today than yesterday,” said Cameron. “I had a good start and was able to get around (Ryan) Dalziel which was important to get the Pro-Am lead. There was a little bit of drama at a couple corners later, so I just tried to make sure we stayed in front of (Kyle) Marcelli because we were pretty even on pace. (Martin) Barkey and Mike are similar, so I knew it was important to maintain some gap there. The RealTime guys did a really great pit stop for us again today. We came in with a small lead and left with a massive one. Mike did a great job having a bit of fun with the Pros in the first part of his stint and brought it home for us. Cool to sweep the weekend.”

“The race started really hectic, there was a lot of contact in the middle of the pack,” said Fuentes. “I was able to go around them because both of the guys in front of me spun out and I was lucky enough to go into the inside. I started getting the lead and maximizing it until it was my time to give the car to Mark. I just kept it in P1, and he did the rest.”

Results from the 51-lap, 90-minute contest are provisional until posted final. Blancpain GT World Challenge America teams and drivers now head to Road America, September 20-22 for the penultimate race weekend of the 2019 season.