We sat down with their Canadian driver duo of Martin Barkey and Kyle Marcelli ahead of Rounds 9 and 10 of the championship at Watkins Glen International. 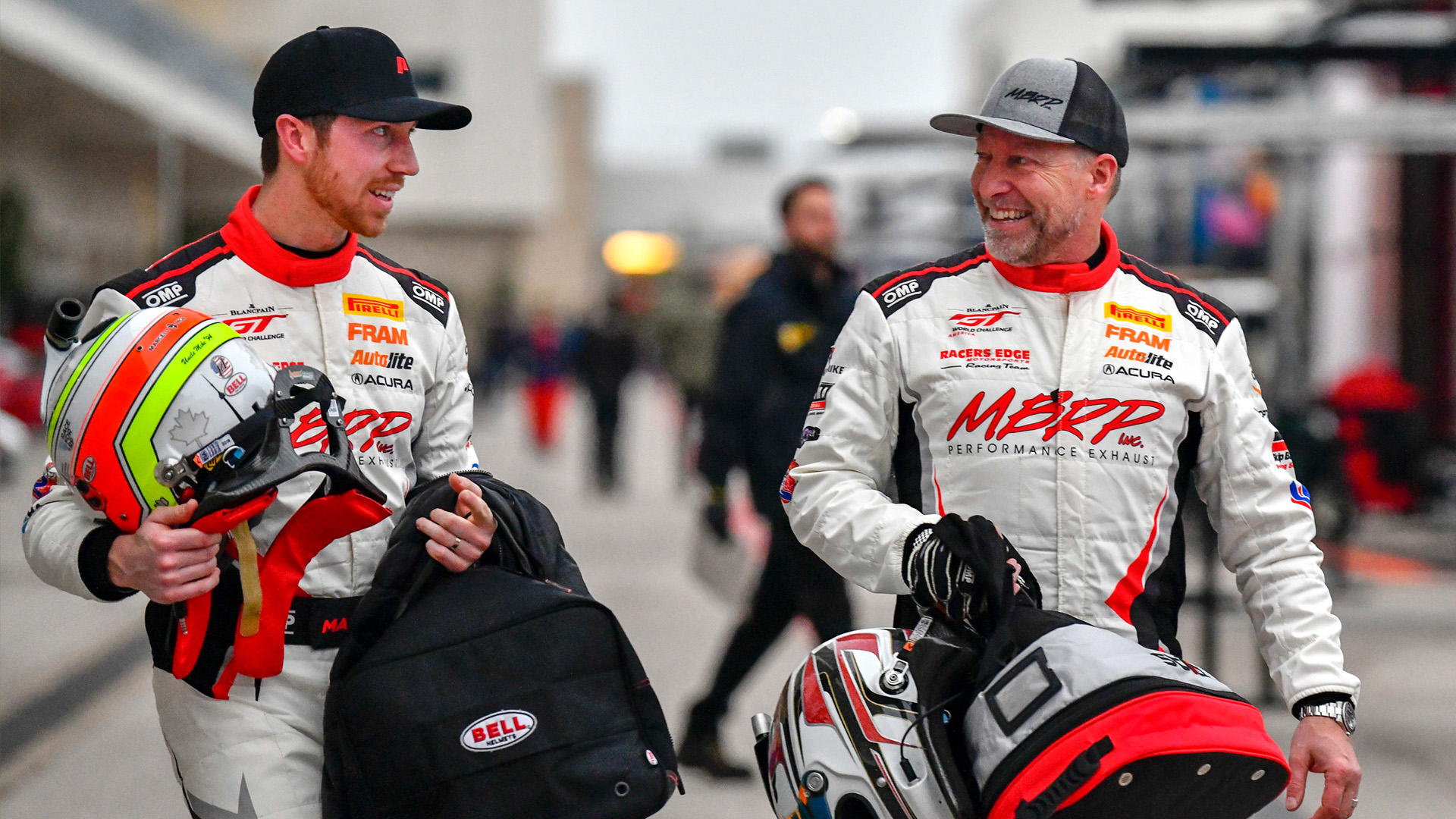 1. What would you say has been the highlight of your season thus far?

Kyle Marcelli: For me, I would say the highlight of the season thus far was Rounds 5 & 6 at CTMP. This was the “home” race for Martin and I. While it’s fantastic to see so many friends and family out to support, it doesn’t come without additional distractions, pressures and schedule challenges. Much like a wedding, you find yourself having short 30-second conversations with everyone. Then, the media of course wants to cover the local story, so downtime between on-track sessions and team meetings quickly evaporates. By the end of the day, you get back to the hotel and feel completely exhausted. In the end, it’s just like every other event, and the result on track matters most. So, to leave the weekend with a 1st and 2nd place result was fantastic.

Martin Barkey: I would have to say winning our first GT3 race. COTA started off great with a 3rd place finish in race 1 but winning race 2 was pretty special being a new car, new team plus racing in the GT3 class. First GT3 win, on the first race weekend the entire team was stoked.

2. New team, new class, new car, and you’re leading the Pro/Am championship. Did you anticipate all of this success right out of the box?

KM: There were certainly a lot of unknowns coming into the season… And, while the program came together only about 4-weeks before the first race, there was a lot of work to do. Our team, Racers Edge Motorsports was up for the challenge, as were both Martin and I. We were able to successfully complete a shakedown test at Roebling Road, and a proper “at speed” test at COTA. It was during the track walk at COTA when Martin and I discussed expectations. And, with all of the unknowns we said we would be satisfied with two top-five results to begin the season. That said, having concluded the event with an overall pole position, a win, a third place and leading the points championship, it was easy to say we exceeded our expectations. A true testament to the work and capabilities of everyone on this team.

MB: Not at all… In fact, Kyle and I had set our expectations for the season opener at COTA at a couple of top five finishes. We said if we could pull this off we were in the mix and could possibly be fighting for a Championship. Not for a second did either one of us think a win was in play not alone two podiums over the weekend. I think this run just shows you what a dedicated team, a good race car platform along with grit and determination can do at the race track.

3. It’s been three months since Sonoma. What have you done to keep yourself busy during the “summer break”?

KM: It’s crazy to think that when we arrive at Watkins Glen, it will have been three-months since Sonoma! Personally, I have kept busy with my IMSA race schedule… We have had five races during the SRO summer break. I have also participated in one Trans Am Series race. And, fulfilled some coaching duties in the Porsche GT3 Cup Challenge Canada. These things have taken up about eight weeks. The downtime in-between has been filled with responsibilities at home… We have just built a new house and there is still lots of odd jobs to keep me busy. Finally, I have been able to do a bit of relaxing at our cottage in northern Ontario. I enjoy fishing when I can, although my wife will tell you I’m a terrible fisherman. Let’s just say its a good thing our dinner doesn’t depend on what fish was caught, because we wouldn’t eat much.

MB: Three months… already? Wow, crazy!! I just moved into our new house last night, this build has kept me busy for the past two years. I'm running a manufacturing business with my wife and son, playing with two grandchildren, going boating, doing some fishing, riding my bile and having Sunday dinner with my family….. I even found a little time to go testing recently at Road America just to knock the rust off the car ( or maybe me as well) as we prepare for WGI.  I love the down time this series gives at this time of year, it really allows for some normalcy and family time mid season. That said I'm ready to get back in the car and see what the back half of the season brings.

4. What kind of approach will you be taking heading into the final six races?

KM: Of course, we are now past the half-way point in the season. We enjoyed a lot of success in the first six rounds, then had a difficult going during round seven and eight at Sonoma. We have led the championship the entire way thus far, but only maintain a small 13-point advantage at this time. That said, we are going to need to ensure that our T’s are crossed and our I’s are dotted, we need to execute perfect, mistake-free races. I expect the level of aggression is going to be higher and we will need to respond. It’s going to be full throttle while trying to make calculated decisions in order to maximize our results and minimize our risks.

MB: I think the entire team will be taking an even more focused approach. Every decision and move will be calculated both and off the track. We cannot make a mistake now, with the competition being so close and capable one simple slip can and likely will move the needle. Our race team can pull this one off. We have everyone here to win this. We need to all be on our game and have a little luck on our side as well.

5. Of the three remaining events, is there one that you’re looking forward to the most? Why?

KM: Of the three remaining events, I’m most looking forward to Watkins Glen and Las Vegas. Watkins Glen because I think it’s one of the best circuits in North America. It has every type of corner, it’s smooth, there is elevation change and it's a circuit that generally makes for great racing action. Las Vegas because it’s Las Vegas. I'm really looking forward to the event and the backdrop. I’ve only been to Vegas one time when I was 15-years old for the SKUSA SuperNationals, one of the biggest karting events on the calendar. I was too young to experience the city, and so I look forward to the SRO Blancpain GT World Challenge America finale.

MB: Watkins Glen is hands down the the race Im most looking forward to running.  Road America is fun and we feel we have a good car for RA, Vegas will be fun as it's a new track for most of us, so there will be lots of learning to see who gets the set up, but WGI is just so cool; it's my favourite track in North America. It's so fast, it really has everything a racer wants. I think the Acura NSX platform will be strong here, I have no doubt the Racers Edge Motorsports guys will get Kyle and I a competitive car to race as well. I'm getting fidgety just typing this … Let’s go race!