Affalterbach. After Bathurst and Spa, the next highlight in the Intercontinental GT Challenge powered by Pirelli (IGTC) is on the schedule for Mercedes-AMG. In the Indianapolis 8 Hour, the teams with the Mercedes-AMG GT3 want to continue their successful streak. During the season opener at Mount Panorama, there was a lock-out of the top three, followed by another overall win in the 24-hour race in the Belgian Ardennes. With five out of six possible podium slots, Mercedes-AMG is clearly in the lead of both the drivers’ and manufacturers’ standings. The upcoming 8-hour race in Indianapolis (8th October 2022) is the penultimate IGTC round and also the finale of the Fanatec GT World Challenge America powered by AWS. In total, eight Mercedes-AMG GT3 are competing at the world-famous Indianapolis Motor Speedway.

For Mercedes-AMG Motorsport, the Intercontinental GT Challenge season has been quite successful so far: in the season opener at Mount Panorama Circuit in Bathurst, teams with the Mercedes-AMG GT3 locked out the first three places. As a result, one manufacturer occupied the entire podium for the first time in history of the prestigious endurance race series. In the 24-hour race at Spa-Francorchamps, round two of the 2022 IGTC season, Mercedes-AMG celebrated the first overall win since 2013. Second place in the Belgian endurance racing classic went to a team with the Mercedes-AMG GT3 as well. Thanks to this successful performance, the performance and sports car brand from Affalterbach holds a commanding lead in the IGTC manufacturers’ standings: after two of four rounds, Mercedes-AMG has over twice as many points as the second-placed manufacturer.

In the IGTC drivers’ standings, Mercedes-AMG drivers also hold the top positions. Here, Frenchman Jules Gounon is leading at 50 points ahead of Daniel Juncadella (ESP) and Luca Stolz (GER) with 43 points each, Maro Engel (GER) with 30 and Raffaele Marciello (SUI), Kenny Habul (AUS) and Martin Konrad (AUT) with 25 points each. In the Pro-Am class standings, Habul and Konrad are in the lead with 40 points each following their class win at Bathurst and third place at Spa-Francorchamps.

The Indianapolis 8 Hour have their third running this year. In 2021, Marciello and Juncadella managed to secure second place together with Timur Boguslavskiy. This year, the Mercedes-AMG teams are again prepared for the race in the best way. In total, eight Mercedes-AMG GT3s will be on the grid. Two of them, the #33 Mercedes-AMG Team Winward Racing entry and the #77 Mercedes-AMG Team Craft Bamboo Racing car, will be racing as Performance cars with extended support from Affalterbach. The Customer Racing cars will be run by Crowdstrike Racing, US Racetronics, DXDT Racing, Hero Life and Kids for Kids as well as SunEnergy1 Racing by AKKODIS ASP.

The two Performance cars of Mercedes-AMG Teams Winward Racing and Craft Bamboo Racing are competing in the Pro class, just like the cars of the US Racetronics team and the DXDT Racing GT3 with starting number 63. The teams Crowdstrike Racing, Hero Life and Kids for Kids and SunEnergy1 Racing by AKKODIS ASP have been entered in the Pro-Am class while the second AMG of the DXDT Racing team has been registered for the Am class. As a result, Mercedes-AMG teams are represented in all three classes in the field. Eligible to score points for the IGTC manufacturers’ standings are the Mercedes-AMG GT3s #6, #33, #75 and #77.

The 8-hour race at Indianapolis is the third of four rounds of the 2022 IGTC season. Moreover, the race serves as the GT World Challenge America season finale. In the North American series, Mercedes-AMG also has good championship chances: after twelve of 13 races, Customer Racing Team Crowdstrike Racing (Riley Motorsports) is only twelve points down on the leaders in the Pro-Am teams’ standings. Its drivers George Kurtz and Colin Braun (both USA) can also seal the drivers’ title in the Pro-Am category at Indianapolis. Currently, the duo is in second place within striking distance of the leading driver pairing. The battle for the GT World Challenge America title will be decided by the intermediate results after the first three hours of racing.

On Wednesday, 5th October, the teams already have the chance to prepare for the race in test sessions. On the following day, the Bronze test and free practice have been scheduled. After pre-qualifying on Friday morning, the three-part qualifying and the pole-shootout in the afternoon determine the starting grid order for the race. The race gets underway on Saturday, 8th October, at 12 noon local time (6pm CEST) and ends at 8pm local time (Sunday, 9th October, 2am CEST). The race is held on a track configuration of the Indianapolis Motor Speedway that also includes parts of the famous oval on which the legendary 500-mile race is run every year. The track owes its nickname “brickyard” to the historic track surface made of bricks, a small part of which at the finish line is still kept to this day.

Christoph Sagemüller, head of Mercedes-AMG Motorsport: “Indianapolis Motor Speedway is one of the world’s most legendary race tracks. The races here are always particular highlights and combined with huge challenges. That also applies to the Indianapolis 8 Hour that will certainly require a lot from our Performance and Customer Racing Teams again. However, we are starting boosted by our outstanding achievements at Bathurst and in the Spa 24-hour race. Of course, we want to continue our winning streak in IGTC. We will do everything to secure the manufacturers’ title in the Intercontinental GT Challenge at Indianapolis already.”

Stefan Wendl, head of Mercedes-AMG Customer Racing: “In the Indianapolis 8 Hour, we are on the grid with eight cars in three classes. With this wide presence and our high quality in the driver line-up, we are in an excellent position to continue our winning streak in the 2022 IGTC on one hand and to bring the World Challenge trophy to Affalterbach for the fourth time on the other hand. Among the four endurance races of the 2022 IGTC season, Indianapolis is the shortest. Therefore, it is even more important to be there at the front right away. Our primary goal will be to make optimum use of the practice sessions and to secure good grid positions in qualifying. I am certain that we then can also bring home the results in the various classes we are hoping for in the race with the right tactics.”

Jules Gounon, driver, Mercedes-AMG Team Winward Racing #33: “Together with Mercedes-AMG, we have achieved a remarkable triple of wins in the last three IGTC races (9h Kyalami, 12h Bathurst, 24h Spa) and we will try to maintain this momentum for the IGTC endurance race at Indianapolis. The 8-hour race of Indianapolis is another major highlight on this year’s race calendar and at an iconic race track! Together with Russell Ward and Philip Ellis, we are a strong trio of drivers and I am very much looking forward to be racing for the great Winward team for the first time.”

Daniel Juncadella, driver, Mercedes-AMG Craft Bamboo Racing #77: We are heading to Indianapolis with excitement and with ambitions to win. Raffaele and I already raced together at Spa and we are looking forward to an exciting race in which we want to make it to the front together with Daniel Morad. The circuit with its long straights always is a special challenge for every driver, especially in finding the best opportunities for overtaking.” 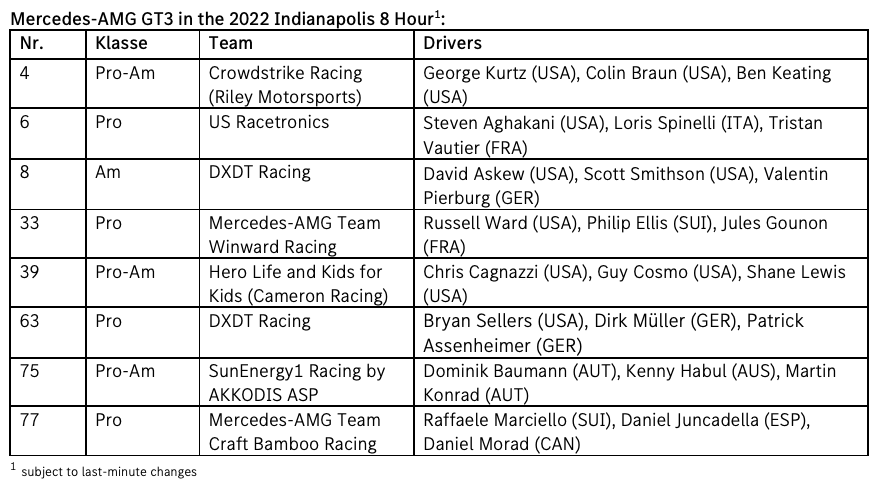