Alton, Va. - Andrea Caldarelli and Jordan Pepper, fielding the #3 K-PAX Racing Lamborghini Huracan GT3, have won the first of the double-header races at VIRginia International Raceway with an overall finish that also tops the Pro class. The DXDT Racing pair of Erin Vogel and Michael Cooper have captured the ProAm class win with an equally impressive third-place overall finish in the #19 Mercedes-AMG GT3. The #61 AF Corse Ferrari team of Jean-Claude Saada and Conrad Grunewald hold on the length of the race to finish their Am entry.

The race started with an abbreviated Qualifying field as the #63 DXDT Racing Mercedes-AMG GT3 had an incident in Qualifying that rendered it unable to compete in Race 1. At the start of the green flag, the usual jockeying for position prior to Turn 1 mayhem ensued, but completed without incident or siginificant changes at the front of the pack. At the back of the pack however, Vogel, who qualified P7 in class and slotted in tenth on the grid, dropped a few positions to the back of the pack while class competitor Ziad Ghandour (#9 TR3 Racing Lamborghini Huracan GT3) came through the front.

In Lap 3, P3 Pro Qualifier Corey Lewis was forced to pit when the #6 K-PAX Racing Lamborghini he was piloting seemed unable to keep race pace; the team would eventually retire that car from the race for further inspection, moving Michael Dinan and the #96 Turner Motorsports BMW F13 M6 GT3 into third place overall and Pro class position. Meanwhile, inception racing's Brendan Iribe (#70 McLaren 720S-GT3), DXDT Racing's George Kurtz (#04 Mercedes-AMG GT3) and number-two qualifier Michael Di Meo (#77 Compass Racing Acura NSX GT3) engaged in a three-way battle for second-in-class position that ran back and forth for some time until Di Meo dropped a tire in Lap 10 and subsequently spun off-track at Turn 11 and dropped the car to the back of the field for the balance of the race.

With Poordad (#20 Wright Motorsports Porsche 911 GT3 R 991.2) and Iribe settled into ProAm first and second in-class, third place positioning came under fire as Kurtz worked to stave off challenges from Jeff Burton (#91 Rearden Racing Lamborghini Huracan GT3) and Taylor Hagler (#93 Racers Edge Motorsports). The three interchanged a few positions until Burton's Lamborghini suffered a mechanical issue that required it to return to its pit box where it, too, would remain for the remainder of the race. In turn this created a Full Course Yellow situation that allowed the field to back up, but happened just prior to the pit window opening, making pit strategy an important part of maintaining or keeping positions. The return to green saw the entire field come in at the first opportunity, with Russell Ward in the #33 Winward Racing Mercedes-AMG GT3 the only car to stay out an additional lap before entering for the mandatory pit. 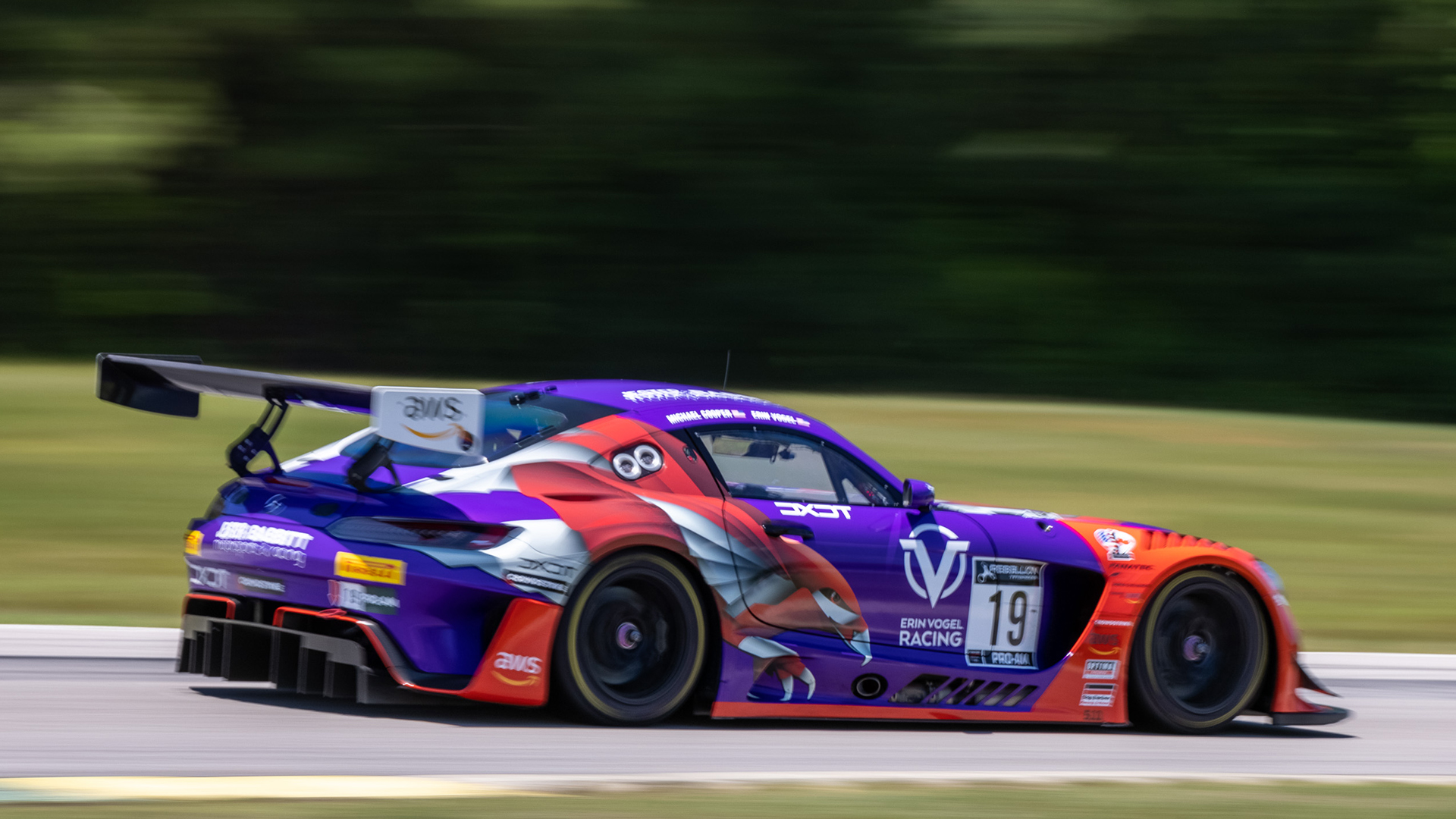 After all pit stops were completed, the Pro field shuffled to see Mikael Grenier in the #33 Winward car in front, Jordan Pepper in the #3 K-PAX Racing Lamborghini in second, and Robby Foley in the #96 BMW F13 M6 GT3. The big shake-up in order occurred in ProAm, where a stellar pit-stop strategy and timing afforded the DXDT Racing team the top spot in-class for Michael Cooper in the #19 Mercedes-AMG; Jacob Abel in the #93 Racers Edge Motorsports Acura NSX GT3; Drew Staveley in the #12 Ian Lacy Racing Aston Martin Vantage AMR GT3; Jan Heylen in the #20 Wright Motorsports Porsche; Colin Braun behind the wheel of the #04 DXDT Racing Mercedes-AMG; Madison Snow in the #88 Zelus Motorsports Lamborghini; Ollie Millroy in the #70 inception racing McLaren; and Sandy Mitchell in the #9 TR3 Racing Lamborghini.

The #33 Winward car was issued a drive-through penalty that the team would serve in lap 28, but not before the ProAm #04 would spin in turn 5, further shuffling the ProAm field and creating new opportunities for teams. Post-penalty, Grenier would slot back into the fourth overall position but this would give a comfortable gap to Pepper and Foley, who had only to maintain position to finish comfortably. As well, Cooper found himself up to third-place overall and first in-class.

The #70 inception racing team would also be issued a DTP for a pit-lane infraction, effectively ending their bid to salvage the race, while an off-track excursion late in the race would do the same for the #9 TR3 Racing entry.

After battling up to a podium-winning position in ProAm, the #93 car suffered a last-lap incident that ended with driver Jacob Abel off-track and effectively unable to cross the finish line.

Results are provisional until posted Final. GT World Challenge America competitors next take to the track on Sunday, June 6th, with the final round of competitor for the weekend dropping the green flag at 1:45 pm EDT. CBS Sports Network live television highlights and race coverage begins at 1:30 pm EDT; check your local listings for channel information. Stream the entire race live for free on the GTWorld YouTube channel or listen to the audio simulcast at SiriusXM Radio channel SXM392 (992 on the web/app) and follow along on your GT World Challenge America social platform of choice.