Alton, VA -- As racers prepare for a trip back to Virginia International Raceway on June 4th - 6th, SRO Motorsports America in conjunction with Operation Motorsport, USO, and VIR are proud to honor service members with their special weekend program, A Salute to Service.

VIR sits in the hotbed of some of the nation’s largest military installations and with the growing number of veterans involved in motorsports, the Salute to Service weekend will further amplify the connection between the two. Active duty members receive free admission all weekend with Veterans receiving 50% off General Admission tickets. In addition, the Salute to Service Car Corral provides premier parking with all proceeds going to Operation Motorsport.

"Since the concept of the Salute to Service, I have been excited to be a part of the event in any capacity," said OpMo Volunteer Coordinator & US Navy Veteran Dave Dalton, "There have been two constants throughout my life – being part of the military and motorsports.  As a retired US Navy Sailor, I know the struggles that our military, active duty and veterans endure daily.  Avenues such as Salute to Service provide pathways via various diversionary therapies – being part of pit crews, photography, hospitality hosting. I enjoy being an enabler, ensuring that the opportunities are available, exciting and bringing new team members to Operation Motorsport. I cannot wait for the weekend to kick off with the gathering of military members at VIR."

Furthering the integration into the weekend, USAF Major Chris Walsh will make his pro racing debut competing in the TC America powered by Skip Barber series. Walsh’s entry will have him become the first active duty member to compete in the SRO America paddock.

"I am very excited about the support and realization of the Salute to Service weekend. With the recent announcement of Operation Motorsport’s partnership with SRO this felt like a great next step to codify the support of this series to our nation's military heroes," says Operation Motorsport US Military Liaison, USAF Major Chris Walsh. "I am even more excited to be driving that weekend for AOA racing in the TC America presented by Skip Barber series in the TCX class. It is a meaningful place and timing to make a professional debut, and it’s magnified by the fact that I can be the first active-duty member to step up into the SRO arena! I’m also excited to have Andrew Ostman, an operation motorsport beneficiary, working with the crew and car for the weekend.  To top it all off my father (retired USAF Master sergeant with 28 years of service) will be waiving the green for my first professional race!"

The VIR race weekend will feature non-stop racing action headlined by the Fanatec GT World Challenge America powered by AWS series. The 3.27-mile, 17-turn circuit is a driver favorite and most notably deemed “heaven on earth” by actor and race aficionado Paul Newman, the perfect venue to kickoff the recently announced partnership with Operation Motorsport.

"Rarely do opportunities present themselves at the perfect time but after a pause that has felt like a lifetime, here we go,” says OpMo CEO & Founder Diezel Lodder. “With the support of our partners at the USO and SRO we are excited to now be able to offer an expanded Diversionary Therapy Program that includes a new R&R opportunity to service members and veterans in the form of a Patriot Car Corral, a Rally Point and other motorsports fan experiences. We are planning to make this available at as many SRO Motorsports America events as possible this year and in the years to come.”

For more information, please visit www.virnow.com. Tickets are now on sale or you can follow along with free livestreams at SRO’s GTWorld YouTube channel and on social media at #GTVIR. 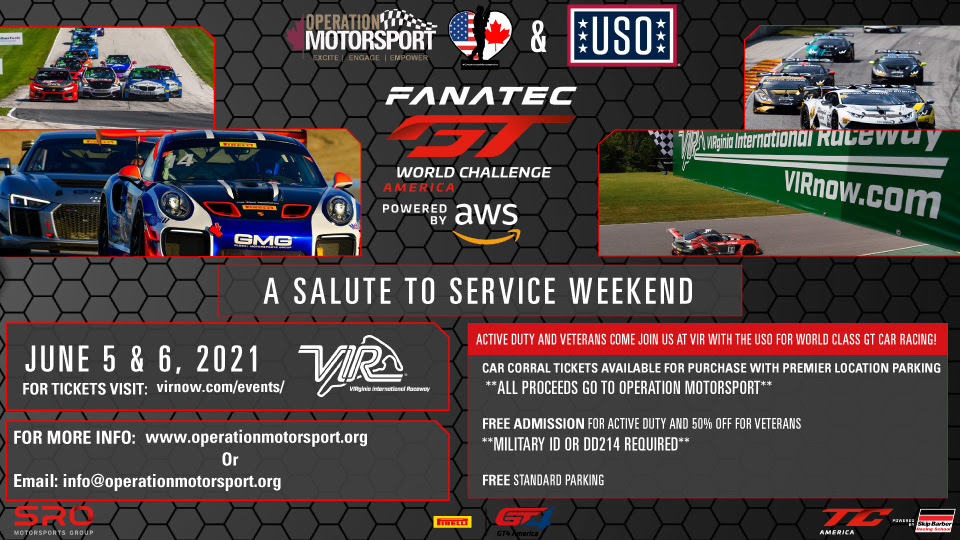