The battle for the Fanatec GT World Challenge Powered by AWS title is developing into duel between Mercedes-AMG and Lamborghini after strong showings from both brands in Europe and Australia.

Lamborghini was the top scorer in the opening Fanatec GT World Challenge Europe Powered by AWS race at Magny-Cours, where Emil Frey Racing took second in the Pro class and clinched victory in the Silver Cup, while Barwell Motorsport was fourth in Pro-Am. This added up to 525 points for the Italian marque.

Mercedes-AMG was not far behind in race 1, scoring good points for fourth in Pro (AKKA ASP) and runner-up in the Silver Cup (Madpanda Motorsport), though it still seemed that Lamborghini would leave the French track closer than ever to snatching the championship lead.

This changed in the second race, where Mercedes-AMG swept victory in the Pro (Toksport WRT) and Silver Cup (AKK ASP) classes and took second in Pro-Am, earning a bumper haul of 647 points. Lamborghini scored 347 thanks to solid showings in Pro and Silver from Emil Frey and a Pro-Am victory for Barwell.

Meanwhile, in Fanatec GT World Challenge Australia Powered by AWS, Lamborghini earned 250 points to Mercedes-AMG's 120 after Andrew Macpherson and Ben Porter clinched both Am class victories in their Huracan. Combined with the European results, Mercedes-AMG's advantage at the top of the standings now stands at 345 points.

Audi Sport was the best scorer in Australia and also enjoyed excellent results in Europe. Yasser Shahin and Garth Tander led the charge, sweeping both Pro-Am races at The Bend Motorsport Park.

In Europe, the Ingolstadt marque took the opening race win at Magny-Cours and was runner-up in race 2 thanks to Pro squad Team WRT. This allowed Audi to earn 1,093 points and capitalise on a disappointing weekend for Porsche, which scored 134 across the two continents.

Ferrari earned good points at Magny-Cours thanks to AF Corse, which won the Pro-Am class in race 1 and was third in race 2, while McLaren also made progress after Pro squad JOTA finished fourth in Sunday's second race. BMW was the only brand not represented during a busy weekend of competition.

The next event on the schedule takes place at Circuit Paul Ricard (28–30 May), where Fanatec GT World Challenge Europe Powered by AWS will stage its third round of the season and the eighth on the global tour. 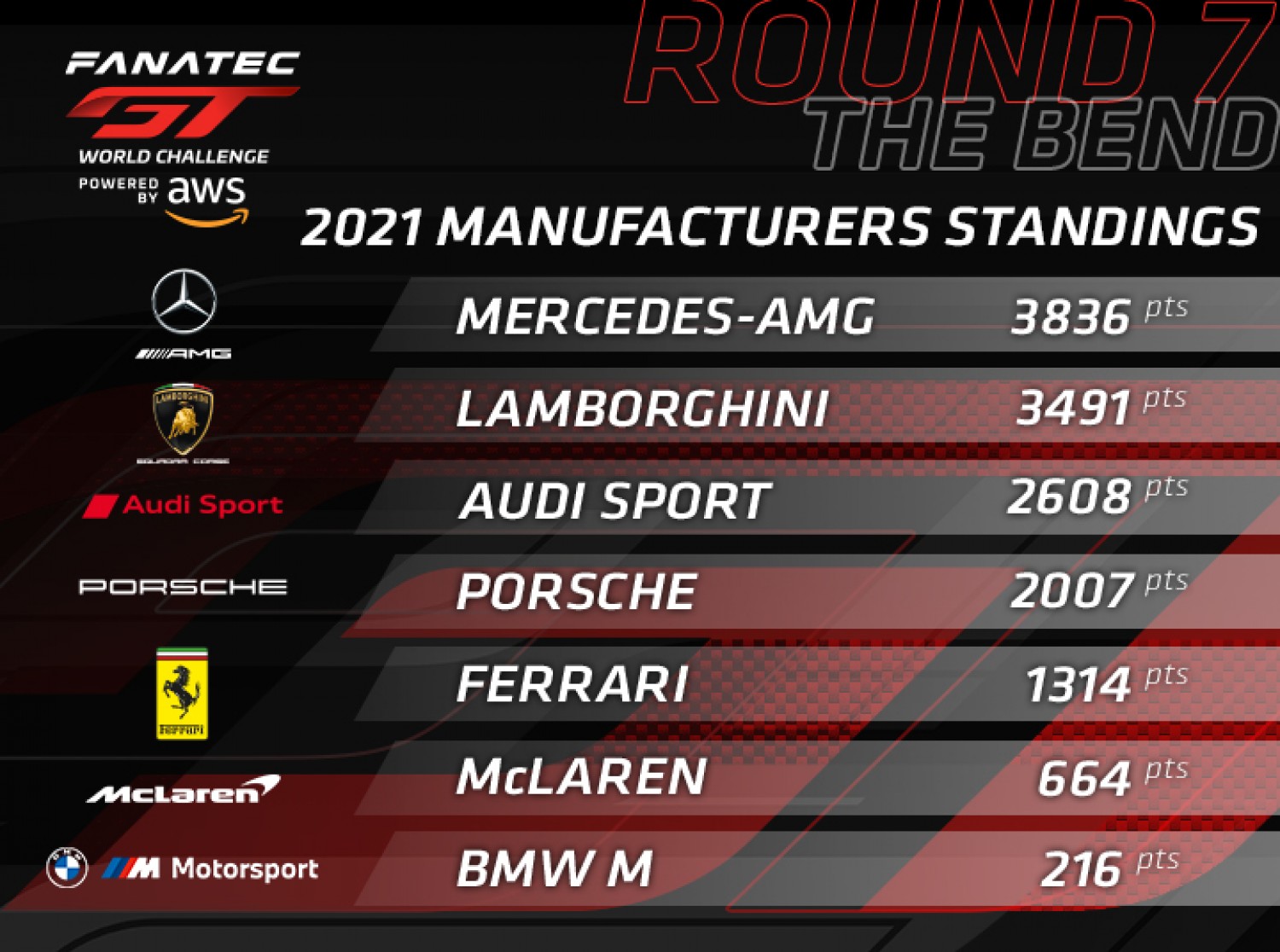