AUSTIN, Texas – Circuit of The Americas threw a lot at DXDT Racing during a jam-packed weekend that included six races, three different SRO America race series and two entirely different weather conditions. But the Statesville, N.C.-based team specialized in recovery and success with class wins in both GT World Challenge America and TC America, and fightback efforts in GT America over the course of the weekend. Despite attrition out of the team’s control, the customer racing program produced highly organized effort, delivering successful results and gaining valuable points in each championship contention.

The trio of Pro/Am class DXDT CrowdStrike Mercedes AMG GT3 cars in Fanatec GT World Challenge America powered by aws had a weekend that matched the 20-turn, 3.4-mile Circuit of The Americas road course’s elevation changes: full of highs and lows. By Sunday’s second race, the highs outweighed the lows as the team continued to push through whatever adversity was thrown at it.

George Kurtz and Colin Braun enjoyed the best weekend among the trio in their No. 04 Mercedes. In race one, Kurtz ran sixth overall, second in class for most of his stint. He turned over the car to Braun in good hands but still on the Pirelli P Zero slicks, a gamble which backfired when Saturday’s rain intensified and required a second stop for wet weather tires. The second stop negated the CrowdStrike Mercedes’ solid early race progress, but still secured a top-five class finish after a final push to gain back positions in treacherous conditions. Things improved mightily on Sunday for race two, under perfect weather conditions—a stark contrast from the day before. After Braun ran a steady fifth overall, Kurtz brought the car forward thanks to an incredible restart after the lone full course caution. The CrowdStrike Mercedes carved through the competitors, with Kurtz following a Pro class Lamborghini past DXDT teammate David Askew into Turn 12, then driving around the outside of Fred Poordad at the turns 16-18 carousel to take the Pro/Am lead. This marked Kurtz and Braun’s second Pro/Am win of the season, having also done so on the Sunday of Sonoma. The pair stand second in the championship point standings, closing in on the top spot headed into the next rounds at VIRginia International Raceway.

Sixth and fifth place finishes in class didn’t do justice to the efforts delivered by David Askew and Ryan Dalziel in their No. 63 Mercedes. Askew passed a couple cars during his stint in Saturday’s race one before handing off to Dalziel. The Scotsman didn’t get a chance to show his undoubted skills due to the poor conditions and a pair of penalties assessed during the pit stop sequence. Similarly in race two, Dalziel had a great seat to the overall battle as he advanced from fifth into third place overall. He remained poised and in strong position, and handed off to Askew in third place overall. A quick spin after a restart temporarily dropped Askew down the order, before he rebounded to a fifth-place class finish. The pair gained a position in the championship point standings, now third behind their sister car, the No. 04 of Kurtz and Braun.

Luck failed to shine on Erin Vogel and Michael Cooper in their No. 19 Mercedes all weekend. Vogel ran a steady seventh in class in Saturday’s race one, before handing off to Cooper, when the weather gods failed to cooperate with the team’s strategy. Cooper valiantly hung on running on the Pirelli P Zero slicks as the rain began to intensify, but he needed another stop to switch to wet weather tires once the conditions became untenable to keep the slicks on. The pairing finished ninth in class. In race two, Cooper matched Vogel in seventh for the entirety of his stint, holding several other cars at bay. However, shortly after turning the car over to Vogel, the car suffered a mechanical issue and was unable to finish. 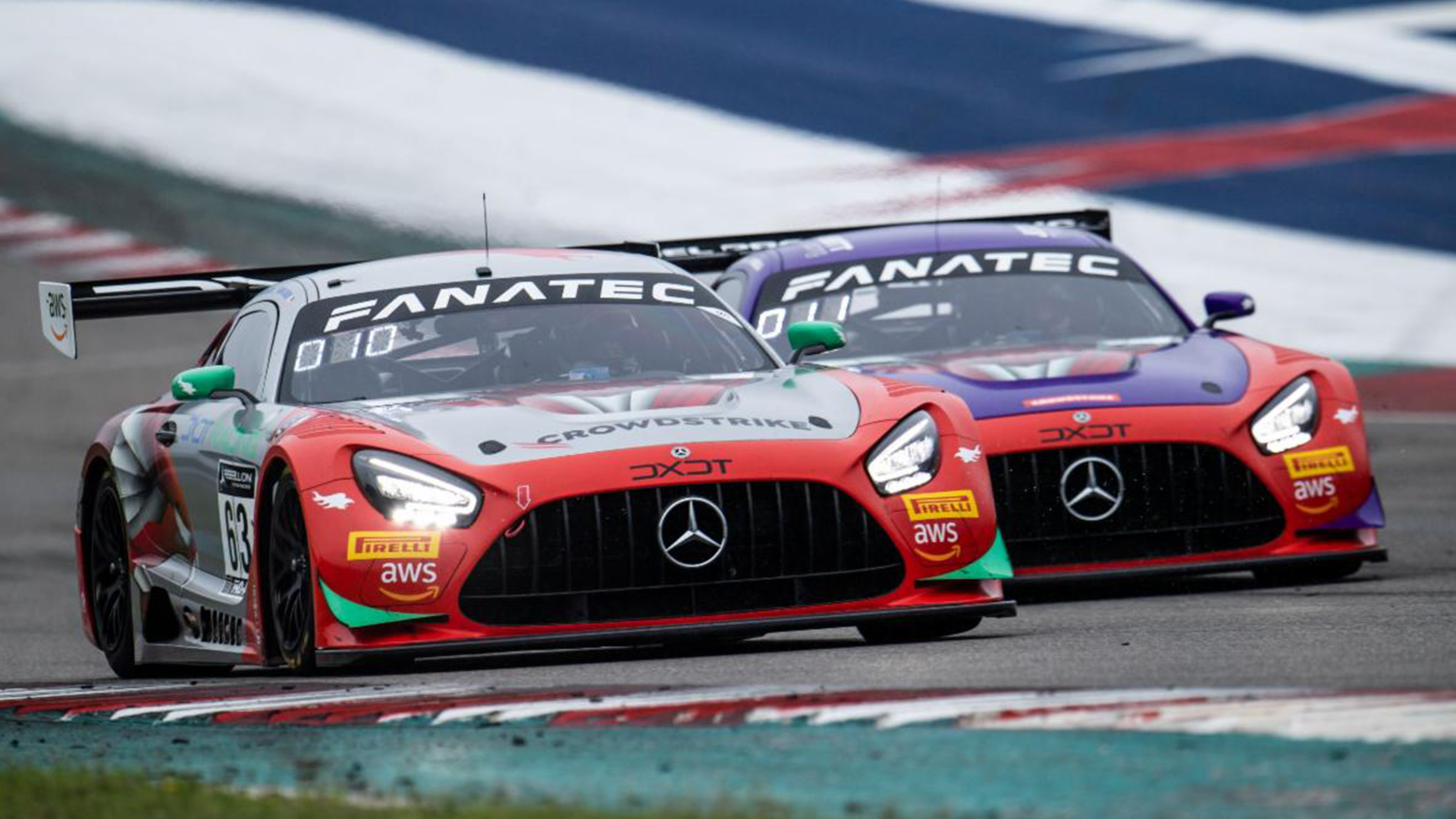 The next race weekend for DXDT Racing occurs closer to home at VIRginia International Raceway, June 4-6, at the track in Alton, Virginia just outside of Danville. That will mark Rounds 5 and 6 of the GT World Challenge America, GT America, and TC America seasons, just a little more than two hours north of the team’s Statesville, North Carolina headquarters

It was a good weekend at COTA. It was tough on Saturday for the team. We caught a lot of penalties unfortunately. It wasn't one particular mistake we can point our fingers at. It's just the way it goes. It was difficult practices and difficult racing because of the rainy conditions Saturday. Sunday was a great day for the team. George and Colin finished first. I got to restart with the pros, got muscled around and finished fourth. Unfortunately Erin and Michael's car suffered a mechanical failure. All in all, it was a good weekend for the team and we're happy to get on to VIR.

Good overall weekend. It was nice to have good pace in both races. Yesterday was unfortunate with a couple of incidents with penalties that put us back. Today was a great race overall if you look at David's average and mine. It was unfortunate the timing of the yellow because it put David right at the front of all the pros that I'd say weren't the kindest in getting him out of the way. That's the way it goes. It's a good learning experience for David. It would have been nice if it had stayed green because I think we had pretty sizable lead on the next car. Good pace and good weekend overall for the team. Congratulations to George and Colin for another win. We'll try to get back at the next one.

This is unbelievable. We had a rough weekend and had to go to a backup car. The team just fought through it and did a great job. Colin drove a great stint even with a little bit of damage. This is extremely satisfying.

Great job by the team. We had a tough week. We had a really fast car Friday but had to go to a back-up car. The DXDT guys did a great job getting it ready; it was no small feat. Saturday was a mess with the weather and all the changing conditions. I'm really happy to come through Sunday and get the win. Certainly George drove an amazing stint. He's worked really hard at the craft and it shows. Starts, restarts... we've talked about that a lot. That's where it happens usually. He was able to get by on the restart and then just put his head down. Seeing him hold off some Pro cars was pretty darn cool. I'm really proud of George and proud of the guys. Our Mercedes was tough. I had a bit of contact at the start and did a little damage to the front. I was glad that thing held on and didn't hurt our performance too much.

It was kind of an interesting weekend at COTA. Yesterday we had a really great start to the race weekend. I had a pretty decent stint; I didn't qualify that great but did have a great drive in my stint. We got caught out a little bit by the weather and had to make an unexpected pit stop to change tires. Then we actually ended up having a mechanical problem anyway. Unfortunately that stayed with us today; something from that repair kind of came back at us and I couldn't even start my stint. It was a great drive from Michael despite that problem that was already starting to show up. Congratulations to the rest of the team on a great weekend.

It was a tough weekend. We had a couple of failures - not Mercedes parts - yesterday and today. We have another test coming up soon. DXDT will regroup and try to get prepared for VIR the best we can. Congratulations to George, Colin and Kevin on their wins today.