As the FCP Euro GT World Challenge America Esports Championship heads into the final stretch, 44 esports racers look to maximize their championship points in the penultimate round at WeatherTech Raceway Laguna Seca presented by Corteco.

The 2.238-mile California circuit is currently the only North American track in Assetto Corsa Competizione, home of the former Intercontinental GT Challenge California 8 Hour. WeatherTech Raceway Laguna Seca was built in 1957 and features the world-famous Corkscrew, a downhill plunging esses that starts your descent nearly 60 feet in elevation change. With 11 turns, this will be a relatively short and quick paced race compared to the European circuits we’ve visited this season.

Following a disastrous Monza race for our two championship leaders, Michael Kundakcioglu managed to rebound to earn enough points to keep his place at the head of the GT3 championship driving the #96 SideMax Motorworks Mercedes-AMG.

Lukas Müller had a similar fate, spinning early in Round 3 from contact with another competitor. The Haupt Racing Team driver managed to claw his way back up into fifth and take over the second position in the championship. His teammate Lucas Müller went on to win at Monza and has moved himself into the Top 10 in the standings.

Racing Line Motorsports Troy Barman had a race ending incident in the last round, earning no points and dropping him third in the championship hunt.

Philippe Simard crossed the line ahead of Müller, but a late race time penalty regulated him to second. With that finish, he’s moved into fourth in the standings in his EGG Motorsports Ferrari 488 GT3.

Cody Blanton enjoyed a race-long battle with several competitors. The Mercedes driver now sits fifth in the championship and looking to close out the season strong.

CMS will also feature entries for Hamza Gulzar, who led early at Monza in his Mercedes-AMG. Jonathan Lee will pilot the LIQUI MOLY Porsche, Josh Staffin returns in a Lexus RC-F GT3, Dirk Groeneveld in the Corteco BMW M6 GT3, and Branden Ouellet in a Lamborghini Huracan GT3 Evo.

Bryan Heitkotter, coming off an impressive podium finish at Monza, will lead the Forsberg Racing team in the #04 Nissan GT-R Nismo GT3. He’ll be joined by team principal Chris Forsberg in the #64 Nissan.

Dylan Archer is back and will once again pilot the only McLaren 720S GT3 in the field. Archer enjoyed battles in the Top 10 at Monza, showing great pace and has experience racing at Laguna Seca in various series. 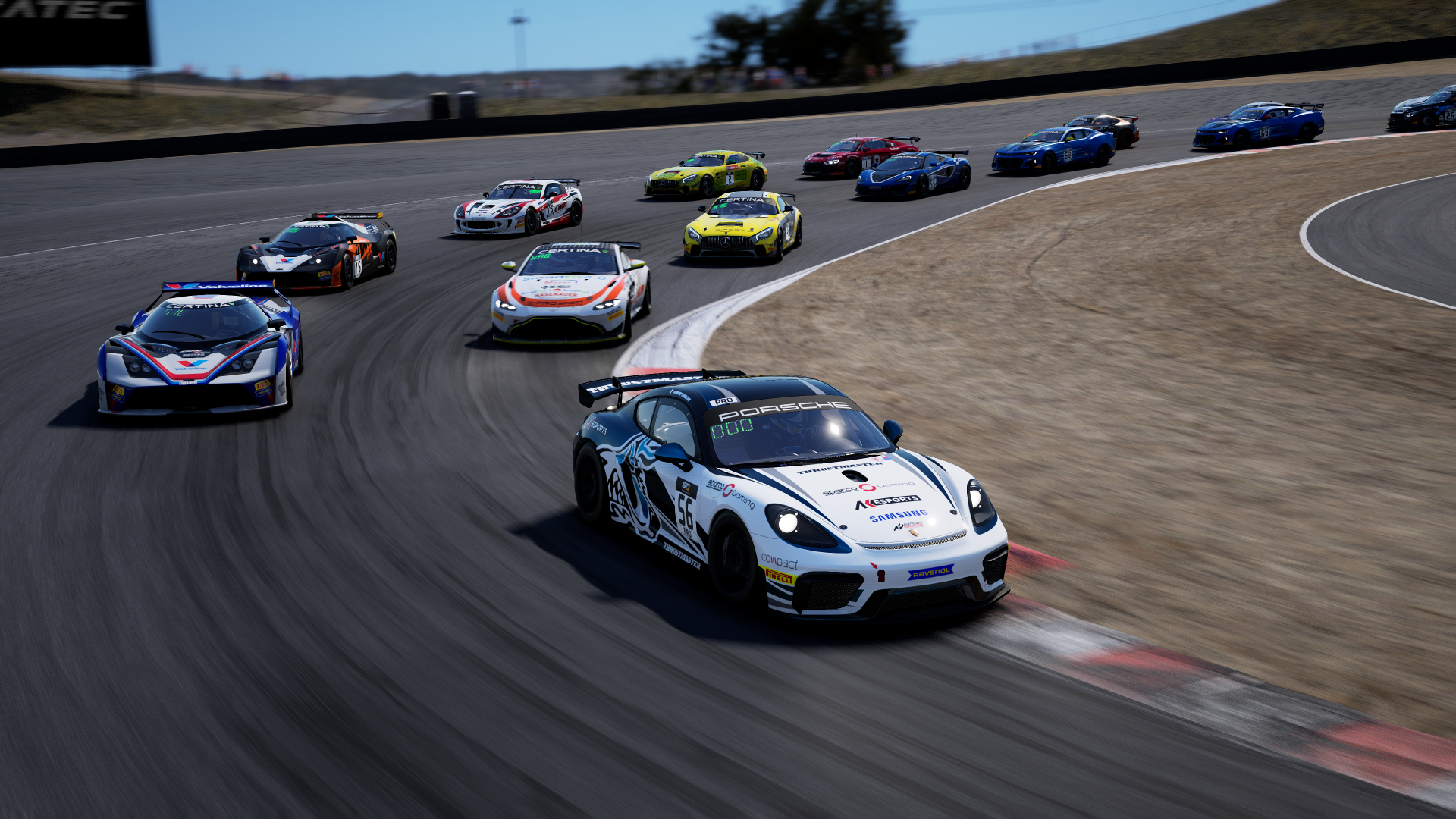 The Jean Alesi Esports Academy driver, Aenore Cavillon, continues to impress in dominant fashion taking three wins in three rounds to date. Another strong finish would mean clinching the title in the penultimate round.

Closest rival Caleb John Lavender has shown the pace, losing track position in traffic at the past round. He looks to close out the season strong in his Archer Brothers Esports Audi R8 LMS GT4.

Cameron Sansano and the Mercedes-AMG GT4 has been on a charge, stringing together strong finishes in the last two events to put him third in the championship. He sits just ahead of Simon Fisher’s Porsche 718 Cayman GT4.

A trio of BMWs are on the grid with podium finisher Tadas Liutkus leading the charge. Also driving M4 GT4 racers are Takis Weekes and Brian Szabelski.

Juan Reinoso and JT Tami look to place the Maserati MC GT4 on the podium. AndieTheLabYT will pilot her Strix Racing Aston Martin Vantage GT4, back in action at Laguna Seca.

With 44 entries at a fast paced WeatherTech Raceway Laguna Seca, the mixed-class racing is sure to be action packed. Don’t miss out and tune in this Sunday.

How To Watch Live

The FCP Euro GT World Challenge America Esports action will be live on SRO’s network including YouTube (GT World), Twitch (SRO Motorsports), and Facebook. Tune in at 3pm ET for the start of qualifying, followed directly with the feature race.