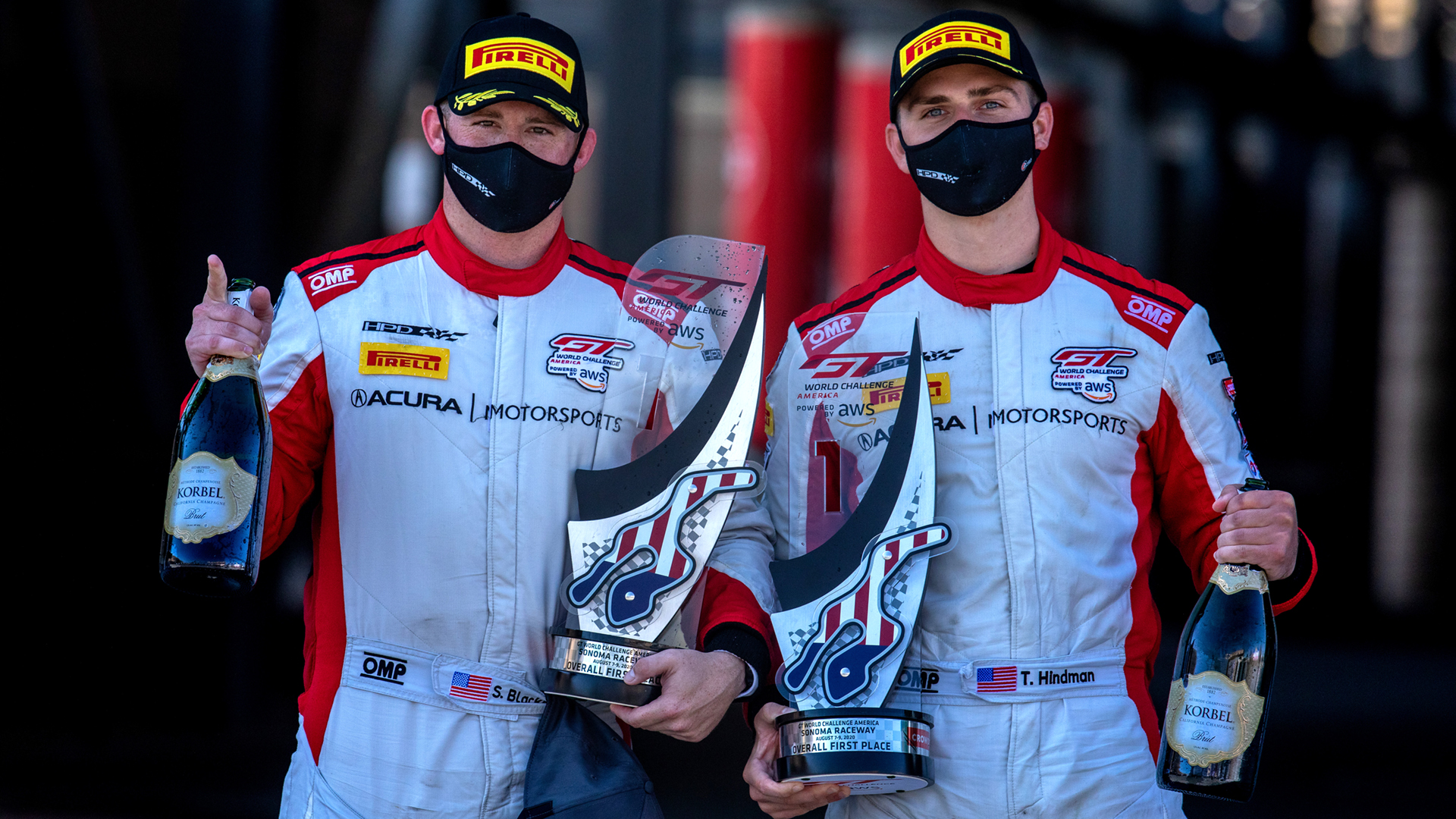 For a number of the 2020 races, the #93 Racer's Edge Motorsport Acura NSX GT3 was the lone machine entered in the silver division but that didn't deter team owner Jon Mirachi and his driver duo of Hindman and Blackstock from setting their sights on the loftier goal of overall race wins and poles and they did just that. Pro/Am division teams and drivers were put on notice from the opening weekend at Circuit of the Americas as the duo, in decisive fashion, swept the 2020 opening race weekend securing both wins.

From there, the Nashville, Tennessee native Blackstock and New Jersey based Hindman took their #93 machine to overall victories at Sonoma in Round 6, and again for both Rounds 7 and 8 at Road America. Even more impressive, the duo only finished outside the overall top three twice in 11 races.

Not only did the pair secure the Overall driver's crown, they helped Acura secure the Manufacturer’s championship with 246 points over Ferrari and Mercedes-AMG who tied for second with 213 points each, as well as helping Racers Edge Motorsports claim the Team Championship. The team’s dominant performances helped secure the series trifecta that many attempt but few achieve.

Hindman explained, “I owe a massive thank you to Jon Mirachi, his Racer’s Edge Motorsports team, and all of the folks supporting us at Acura Motorsports/HPD for sticking it out with us this year amongst so much uncertainty.” 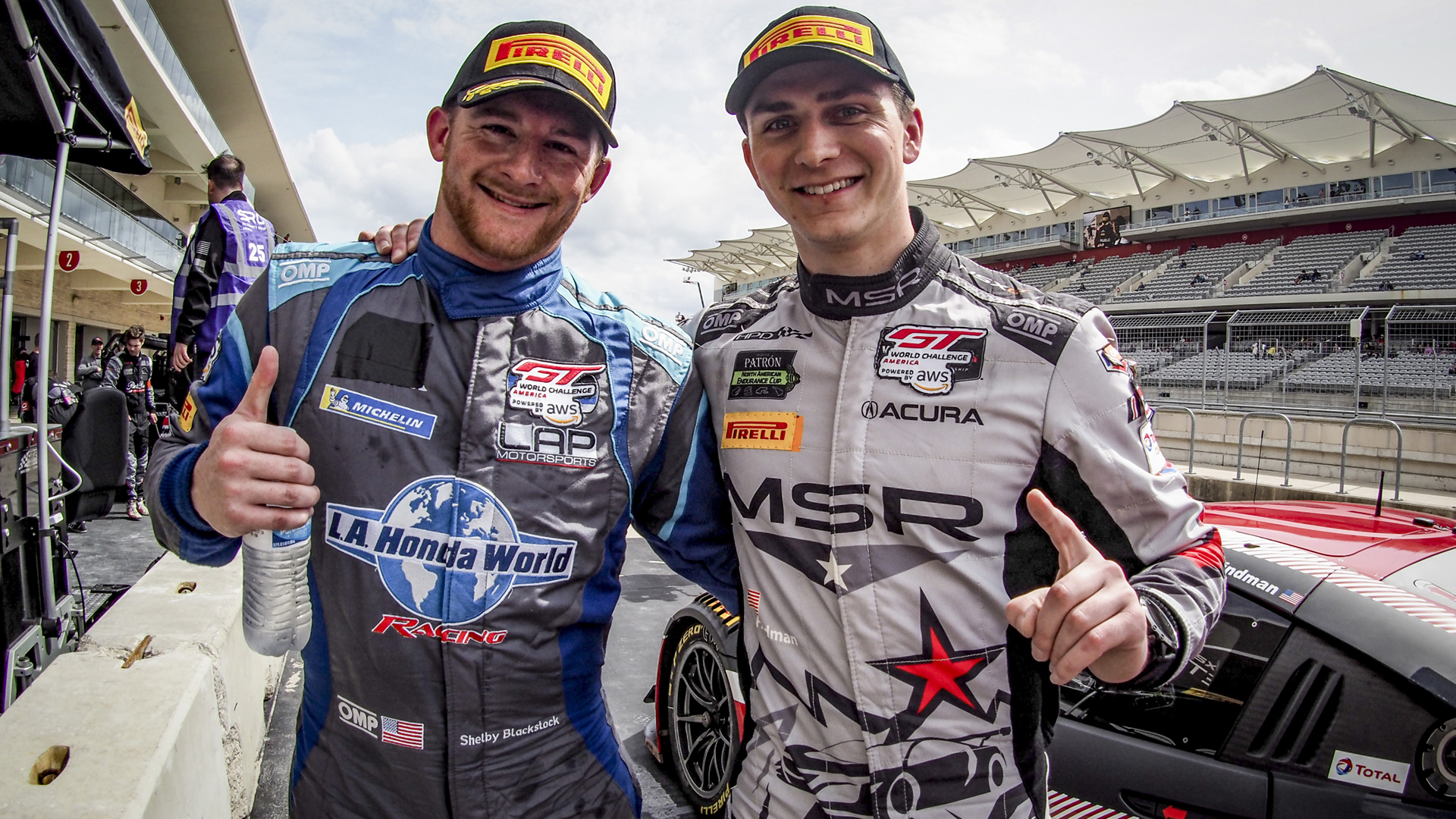 “Our team continued to push us drivers and themselves to learn and improve in order to walk away from 2020 as champions - I’m proud that we did just that by achieving both Driver and Team titles overall. Grabbing the Manufacturers championship for Acura was also a huge goal of ours this year,” Hindman continued. “Finally, having a great friend and excellent co-driver in Shelby made the success this year even more gratifying. He really did one hell of a job, from having never driven the car before COTA in March to ending his first season of GT3 racing as a champion. I’m humbled to have played a small part in such an impressive team.”

Co-driver Blackstock included, “It feels pretty good to wrap up our 2020 GT World Challenge America program with a championship sweep; Driver, Team, and Manufacturer champions! A lot of things fell into place that made the year even more special. Bringing Acura Motorsports a championship in the first year of being involved with the brand is a great feeling, especially in the Acura NSX GT3 Evo!”

“To finally be able to co-drive with Trent Hindman after having been friends with over ten years of racing against each other, and to finally be paired up in the same car, we knew we would be strong,” Blackstock added. “It was a great package overall. A strong team, manufacturer, and car gave us the tools we needed to get the job done. I want to thank Racers Edge Motorsports, Acura Motorsports, and Honda Racing HPD for their support throughout the year!”