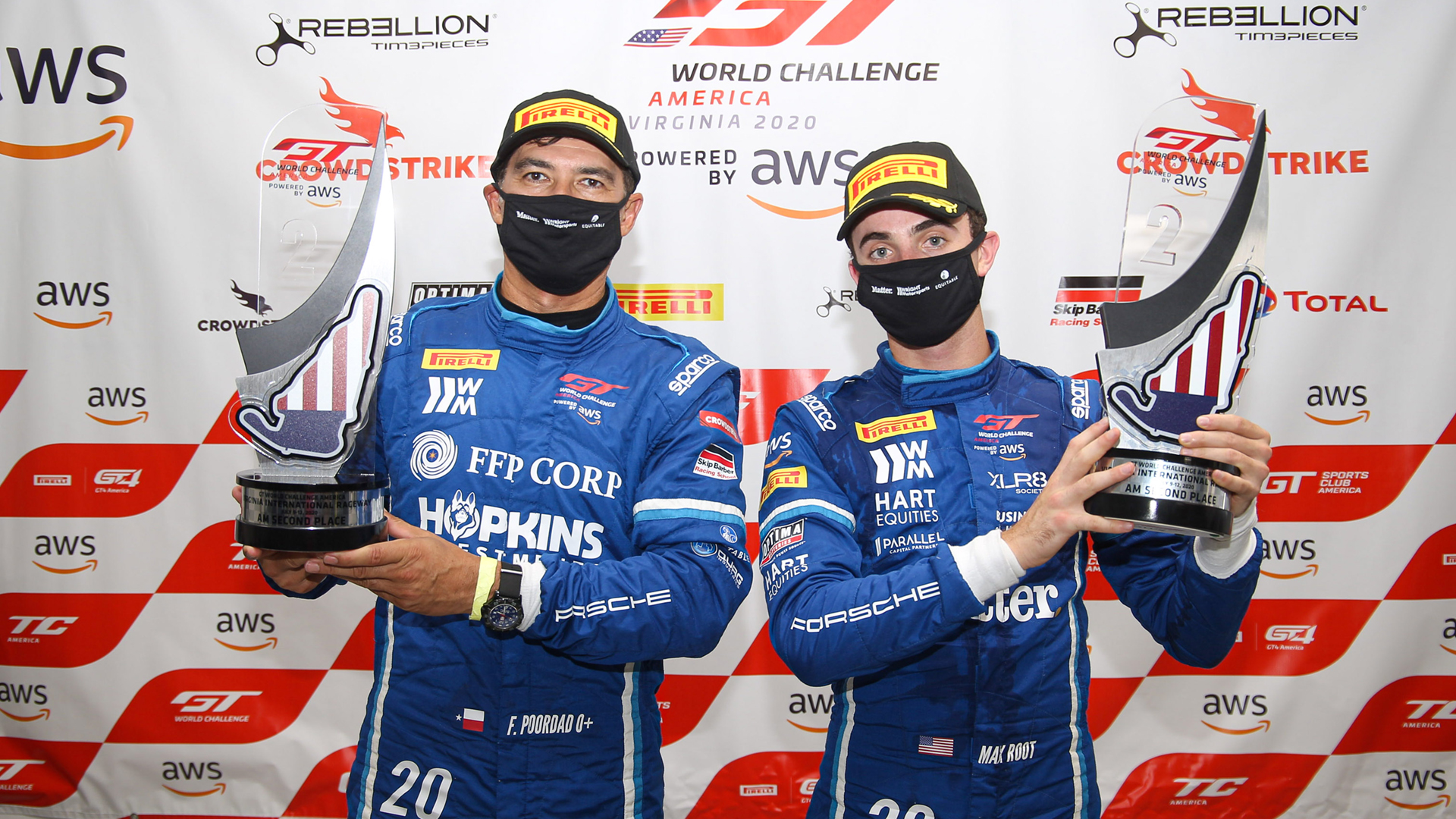 Austin, Texas - The 2020 GT World Challenge America powered by AWS season provided many interesting storylines, and one of those was the impressive performance shown by probably the most unlikely driver pairing in the paddock, the Wright Motorsports duo of Fred Poordad and Max Root. On paper, in what seemed an unorthodox driver pairing, the 55-year-old physician and motorsports veteran and the 19-year-old, up-and-coming aspiring pro driver were a formidable duo in claiming the 2020 GT World Challenge America Am division championship. While the team was a force in the Am division, the duo also challenged for the overall podium positions race in and race out.

By day, Dr. Poordad is a professor of medicine at the University of Texas Health Science Center in San Antonio, and his love for motorsport has seen him involved in the racing scene since 2011 previously competing in the Porsche Cup Challenge, before coming over to run in GT World Challenge America.

Nineteen-year-old Root, a senior at Pepperdine University studying business, took his first steps in GT3 competition this season. Previously, Root was named to the Porsche Young Driver Academy class in 2018 and besides winning the Am championship alongside Poordad was the youngest driver in this year’s running of the 24 Hours of Le Mans. He drove alongside accomplished veterans Jan Magnussen and Richard Heistand, and the team finished 6th in what is arguably one of the most prestigious automobile races in the world.

While the duo dominated the Am category, they also finished on the overall race podium three times including a second overall podium finish in Round 6 at Sonoma, no easy feat considering the level of top flight professional racers competing in both the Pro/Am and Silver division categories in GT World Challenge America. 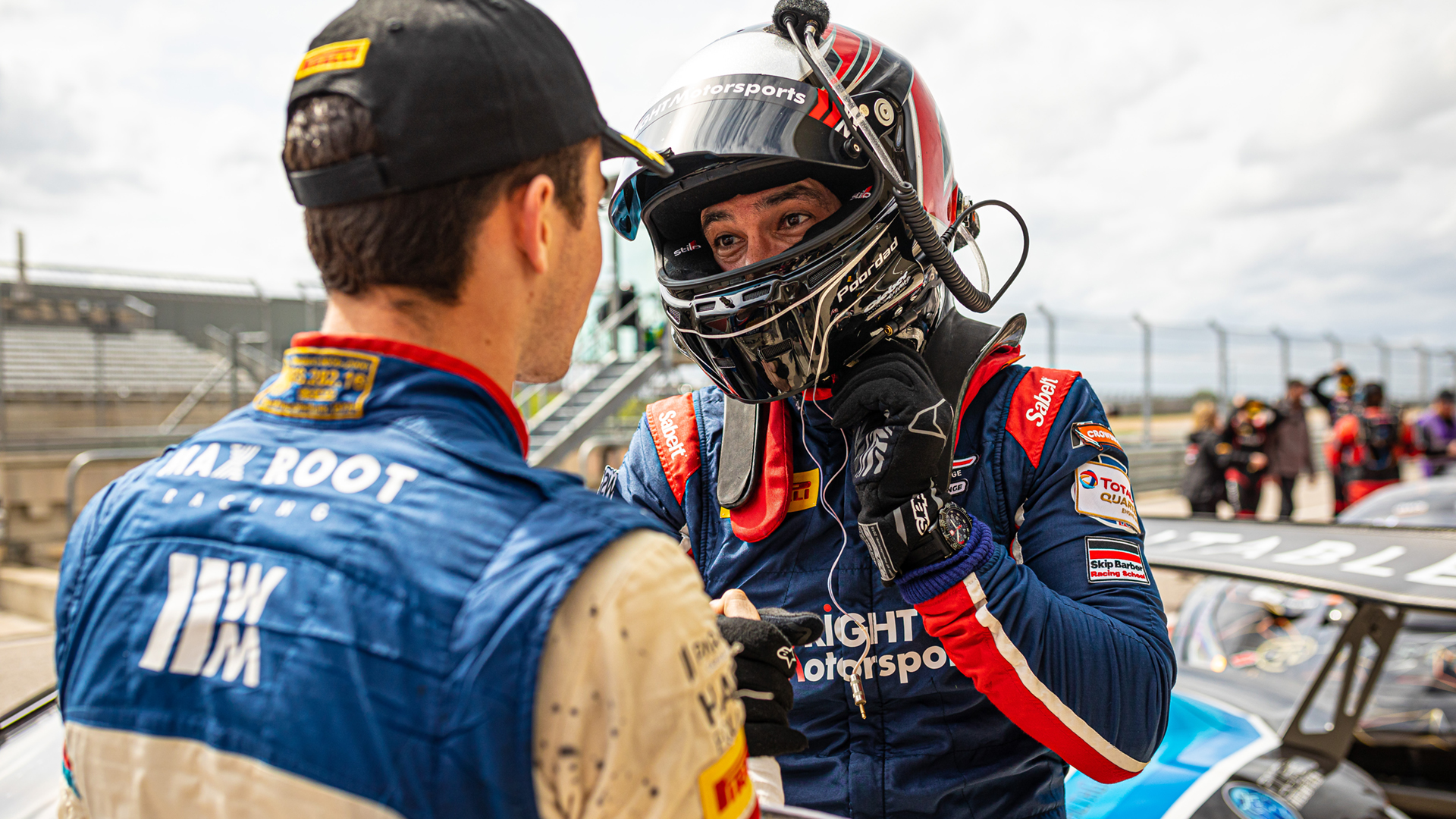 It was those performances in the overall category that drew accolades from veteran sports car and World Challenge series announcers Greg Creamer and Calvin Fish, two of world's foremost racing broadcasters with over 60 years of experience between them. Both announcers marveled at Poordad's steady, unflappable focus behind the wheel especially when battling and maneuvering in the thick of things with some of the best pro-rated sport car pilots in the world. Roots' unabashed ‘I can compete with the best’ on-track approach also had the announcers singing praises throughout the season.

To top off their championship season, the pair, along with accomplished pro Jan Heylen closed out 2020 with an impressive 6th place overall finish, and first in Silver Cup in the Indianapolis 8 Hour race at the Brickyard.

“This season in GT World Challenge was an amazing one for us,” Poordad explained. “With all the uncertainty around if we would even have a season, the SRO group pulled it off and we were able to compete at some great venues. Max and I had never raced in the GT3 class, but we had some exceptional runs, even competing for overall podiums. With the ups and downs that racing brings, I felt that we continued to improve as the year went. I want to thank the Wright Motorsports team, my co-drivers, Max Root and Jan Heylen, and the SRO organization for letting us all pursue our passion for motorsports.”

Root added, “I am humbled to be the AM drivers and Team champion for 2020 with Fred Poordad and Wright Motorsports. The results Fred and I were able to put together for our first year in a GT3 car exceeded all expectations. Open communication and teamwork were the keys to our success this year.” He concluded, “Thank you to all of the fans, every team member on Wright Motorsports, Porsche Motorsports North America and to all my supporters for making this year possible.”

With the 2020 season now in the books, teams and drivers prepare for testing and training in the offseason with a focus on the start of the 2021 GT World Challenge America campaign scheduled for March 5-7 at Sonoma Raceway in California. Follow all the news from the series at www.gt-world-challenge-america.com