SUNNYVALE, Calif. – CrowdStrike, the Official Internet and Cloud Security Provider for SRO America and presenting sponsor for the entire race weekend, is back in racing action as the Blancpain GT World Challenge America Championship resumes Friday through Sunday at Watkins Glen International.

In addition to its prominent position as a leading sponsor and partner of SRO America, CrowdStrike will be active on the track with its Mercedes-AMG GT3 racer. George Kurtz and Colin Braun, who share the No. 04 CrowdStrike/AWS/Accel/DXDT Mercedes-AMG GT3, are firmly entrenched in the Pro-Am Drivers Championship chase after four of seven events.

Each Blancpain GT World Challenge America event consists of two 90-minute races each weekend. Kurtz and Braun are fifth in points with six races left in 2019, highlighted by a runner-up finish at Virginia International Raceway and a third-place podium result at Canadian Tire Motorsport Park. 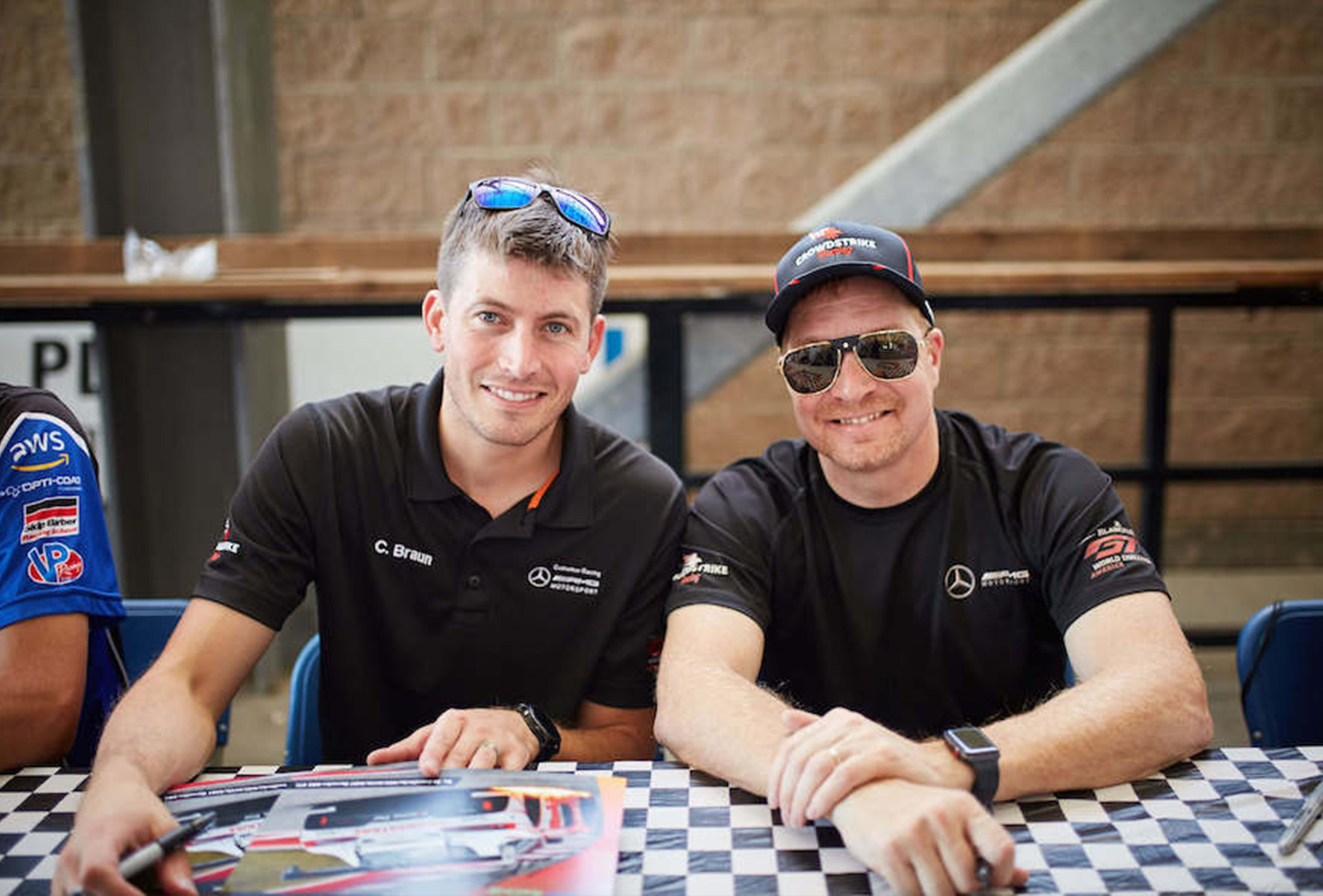 “Everyone at CrowdStrike is excited to return to competition in SRO America and the Blancpain GT World Challenge America series,” said Kurtz, CrowdStrike co-founder and CEO.

“This is one of the great, historic race tracks in America,” he added. “Its popularity among race fans is great for our Official Partnership of SRO America. We expect very significant exposure for CrowdStrike to fans around North American and the world. Year over year, racing continues to be a tremendous activation for our brand.”

Braun is a two-time winner and past pole-sitter in Prototype competition at Watkins Glen.

“I’m really looking forward to getting back on track at Watkins Glen with the CrowdStrike team,” Braun said. “It is a demanding track that throws many challenges at you as a driver but it’s one of my favorite tracks. I think it’s going to be a good weekend for George, myself and the entire CrowdStrike team. DXDT has been working hard to make our CrowdStrike Mercedes-AMG GT3 faster each week and the top step of the podium is within sight!”

CrowdStrike, AWS and DXDT are partnering with Operation Motorsport for this race weekend. The purpose of Operation Motorsport is to engage ill and injured service members and veterans affected by military service, through motorsport activities to aid in their recovery and rehabilitation. DXDT will host Sargent Major Jason Leach, a 26+ year active Army soldier, who is pursuing his interests toward an ultimate goal to either own or manage a race team.

The Blancpain GT World Challenge America will compete at Watkins Glen International from August 30—September 1. Race One is set for 3:10 p.m. ET on Saturday with Race Two at 3:15 p.m. ET on Sunday and airing live on CBS Sports Network. For more information, visit CrowdStrikeRacing.com.

CrowdStrike, a cybersecurity technology company, is the leader in cloud-delivered endpoint protection. Leveraging artificial intelligence (AI), the CrowdStrike Falcon® platform offers instant visibility and protection across the enterprise and prevents attacks on endpoints on or off the network. CrowdStrike Falcon deploys in minutes to deliver actionable intelligence and real-time protection from Day One. It seamlessly unifies next-generation AV with best-in-class endpoint detection and response, backed by 24/7 managed hunting. Its cloud infrastructure and single-agent architecture take away complexity and add scalability, manageability, and speed.

DXDT Racing LLC is a high-performance sports car racing team founded by team principal David Askew in 2014 and located in Salt Lake City, Utah. The Team’s primary focus is on GT3 and GT4 racing in North America. The team has fielded cars in various racing series such as SRO’s Blancpain GT World Challenge America, IMSA’s Michelin Pilot Challenge, and Lamborghini’s Super Trofeo series. Although the team is young, DXDT is comprised of a group of highly experienced professionals with championship winning backgrounds.