Indianapolis, Indiana - The Indianapolis 8-Hour kicked off at noon without a cloud in the sky, featuring 25 GT3 cars across four classes; Pro, Pro-Am, Am and Silver Cup. As the American flag, used in lieu of the usual green flag, dropped, intense action shaped up across all parts of the field.

Conquest Racing’s Allesandro Balzan quickly put pressure on pole sitter Russell Ward in his #33 Winward Racing Mercedes-AMG GT3. The Ferrari 488 GT3 driver wasted no time and grabbed the lead 17 minutes into the race, as Ward was left to fend off the charging bull of Marco Mapelli in the #1 K-PAX Racing Lamborghini Huracan GT3.

Eventually, Ward would yield to Mapelli, who in turn advanced on Balzan and moved into the top spot, all within the first 45 minutes of the 8-hour race. Canadian Nick Wittmer, part of the ST Racing outfit, then surged into fourth place in his #38 BMW M4 GT3, the lone Silver Cup entry.

The #1 K-PAX Racing Lamborghini Huracan GT3 of Michele Beretta dropped two positions after an overly confident maneuver into Turn 1, allowing eSport celebrity Daniel Morad to move his #77 Craft-Bamboo Racing Mercedes-AMG to second place, an impressive feat after starting the race back in 15th on the grid.

Balzan started experiencing ABS issues, making him drop down the order. Balzan was not the only one who had to deal with unforeseen issues, as the Pro-Am class saw major drama unfold. Power steering issues plagued Championship leader Jan Heylen in the #45 Wright Motorsports Porsche 911 GT3-R (991.ii), while Championship runner-up #04 CrowdStrike Racing with Riley Motorsports Mercedes-AMG went behind the wall due to a damaged radiator.

This could very well open the door to the #93 Racers Edge Motorsports Acura NSX GT3, who is currently sitting third in the Pro-Am Championship. Although Mario Farnbacher had an early drive-through penalty, his consistent fast laps put the team right back in the chase.

A little bit of argy-bargy between the #96 Turner Motorsport BMW M4 GT3 of John Edwards and the #1K-PAX Racing Lamborghini Huracan GT3 of Andrea Caldarelli heightened the level of action in the first half of the race despite the fact that there was not a single caution flag.

Below are the results at the halfway point. 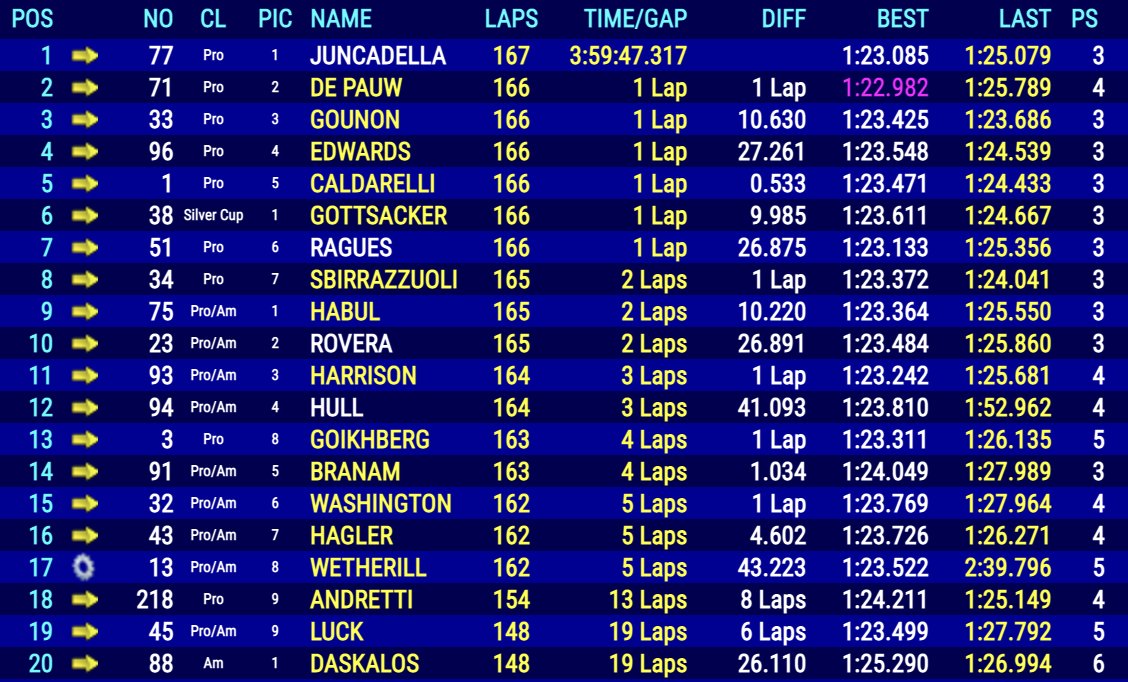