The classic Alton, Virginia road course will host six hours of on track GT3 action around the 27-mile, 17-turn full-course configuration. With only two short practice sessions before Race 1, every second spent on track will be imperative for the drivers to get into the rhythm and the Wright Motorsports team to dial in on the setup of the Porsches.

"The setup is very tricky at VIRginia International Raceway," said Wright Motorsports Technical Director, Bob Viglione. "There are a lot of high-speed corners and transitions as well as long straights so you need to have very good aero handling. The top speed is also very important so having a good balance of both is key at a track like this." 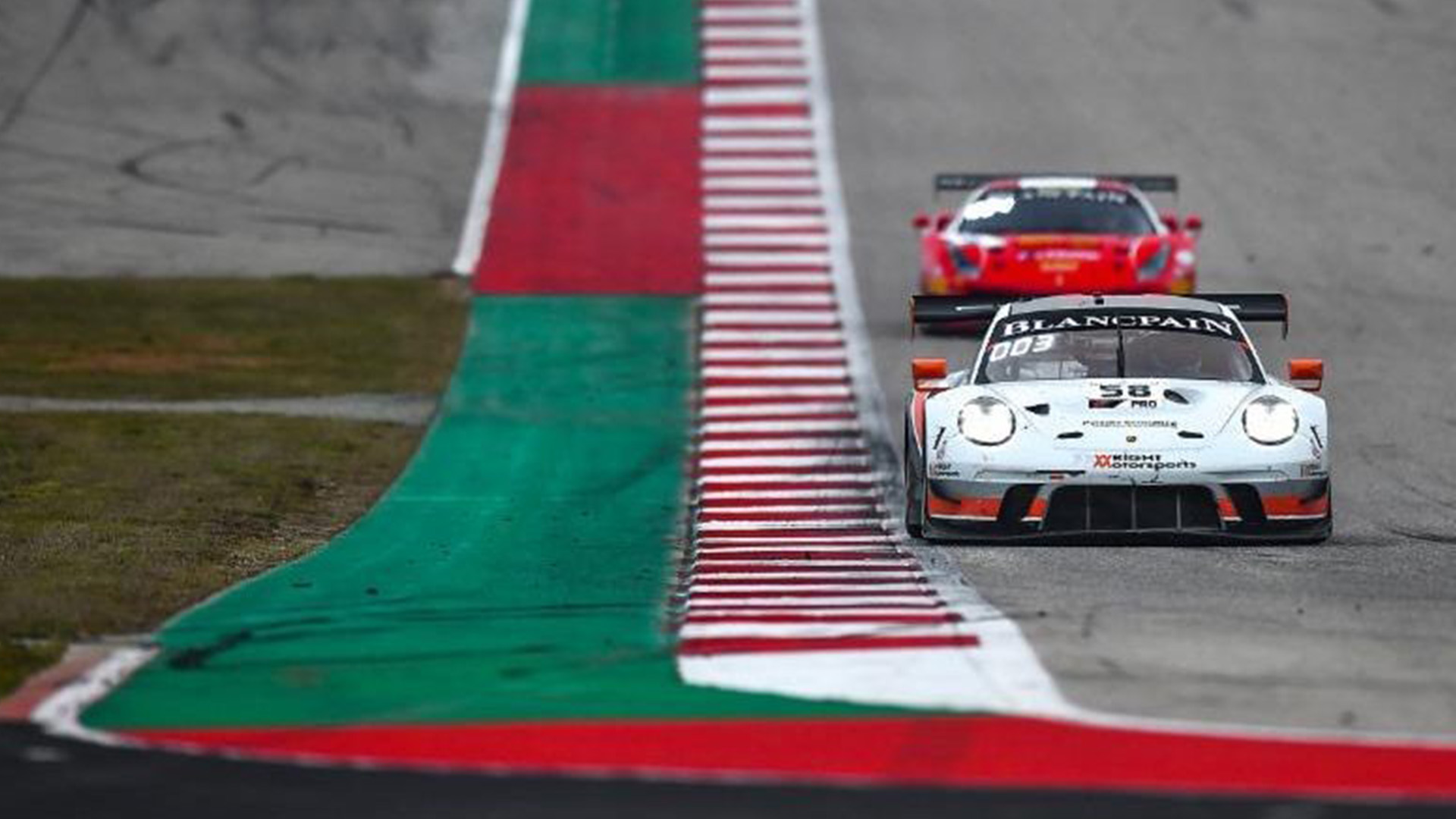 Most recently known for his drive to the victory at the Bathurst 12 Hour, Campbell is a reigning Le Mans 24 class winner and Porsche Carrera Cup Australia champion. No stranger to Wright Motorsports, the 24-year old took part in last month's California 8 Hour campaign, showcasing himself as a valuable asset to the Ohio-based team.

Wright Motorsports started the season off on a high, taking podiums across the board at Circuit of the Americas

After two third place finishes, Long and Hargrove enter VIR third in the pro-class title chase, with a seven point deflect to the lead. Imperato earned a second and third place podium paired with Dennis Olsen, which has him second in the pro/am championship, just two points behind Barkey and Marcelli.

Both drivers of the No. 58 are familiar with the podium at VIR. Long has one victory and five podiums to his name— three under the Wright Motorsports banner. In 2018, Hargrove earned a pair of VIR podiums driving a Porsche 911 GT3 R in SRO America competition.

Imperato has also had his share of success at the Virginia road course, having driven a Wright Motorsports prepared Porsche to the podium in IMSA GT3 Cup Challenge competition. While every North American track on the calendar is new to Campbell, the Porsche Young Professional has already proven to have a knack for getting up to speed.

On track sessions begin Friday with Practice 1 set for 11:30AM EDT. Live coverage of Race 1 will begin at Saturday at 2:00PM EDT at gt-world-challenge-america.com/watch-live. For the first time, SRO America will offer LIVE CBS Sports Network coverage for Sunday's race, beginning at 1:00PM EDT

"We had a really productive start to the season at COTA with a lot to be positive about. Now moving onto VIRginia International Raceway, we're looking at a much different track. There's a lot of grip on the surface, curb usage and tight, technical sections that I think will bode very well for the Porsche. It’s not easy to pass, so qualifying will be key. We won’t lot of track time leading into the race without a promoter test day, so we're going to have to be as efficient as ever with the time that we do have.”

"VIRginia International Raceway is always a highlight as it has some sections that really test the driver. Turn 10, the fast left hander at the top of the esses, is one of those corners. You push the car to its limit, edging right out to the grass on exit with no room for error. The track layout is one that may be difficult for us to compete at the front on raw speed, but the Wright Motorsports crew showed they are great in the pits and our Porsche shines over a long run. Patrick and the team have been fantastic to work with and I know we’re all eager to improve on our two third place finishes from COTA!"

"I’m glad it is finally time to go racing again. We left COTA with some good momentum and we look to continue that this weekend at VIRginia International Raceway. Matt will be a great addition to the team and I look forward to driving with him this weekend. VIR is always one of my favorite tracks that we go to. I'm excited to get out there and confident that we will have some good results."

"I'm very much looking forward to joining Wright Motorsports again and teaming with Anthony Imperato for the first time in Virginia. VIRginia International Raceway is a new track for myself and this is my first time joining the SRO America championship so I'm looking forward to it. Hopefully we can get a good result right out of the gate. Anthony and Dennis (Olsen) showed some great promise with a couple of podiums in the first round so we're going to aim to do the same. I'm excited to get things started."