Skip to Main Content
The 2021 SRO America race season is set to begin in March, and DXDT Racing is operating at full speed ahead for what will be an action-packed season. The new season will see the return of the sports car racing team to the Fanatec GT World Challenge America powered by AWS with the pairings of David Askew and Ryan Dalziel, and George Kurtz and Colin Braun back in GT3 competition, joined by Erin Vogel and Michael Cooper for a three-car team effort. CJ Moses will advance from the TC America series to join the GT America competition, and 2020 TCA Champion Kevin Boehm will return for another season in TC America. CrowdStrike Racing will also return as a strong supporter of the team, back for its third year of partnership with DXDT Racing.

The 2021 Fanatec GT World Challenge America powered by AWS championship will remain consistent with last year’s format, hosting two 90-minute races in one weekend, with two drivers sharing one machine. This will mark the team’s 5th year racing Mercedes machinery, now returning with three cars for the seven-weekend championship. The season will again end with the Indianapolis 8 Hour, running in conjunction with the Intercontinental GT Challenge. DXDT’s 2020 GT3 racing effort produced strong performance, with the No. 04 of Kurtz and Braun finished second in the Pro/Am championship, leading the team charge with three wins and eight podiums. They finished the season on a high note, racing in varying conditions to capture the win at the Indianapolis 8 Hour. No. 63 pairing of Askew and Dalziel also had a strong season, earning seven podiums and finishing third in the championship standings.

The newly established GT America championship brings a return of SRO America to its roots, running seven double headers in a single driver format, racing for 40 minutes. The series will include GT3, GT2, and GT4 platforms aimed for Bronze drivers to have a wide variety of competition across North America. CJ Moses will join the new series riding the momentum of five podium finishes from the 2020 season.

Now in its fourth year of competition, the 2021 TC America format will stay relatively unchanged from the 2020 format, featuring a single-driver, 40-minute race format. The new year will see the return of the TC and TCA classes, adding a new TCX category. TC America will also run a seven-weekend championship, comprising 14 races total. After clinching the 2020 TCA championship title, Kevin Boehm is back to continue the impressive run into 2021. Last season, Boehm won almost half of his races, finishing in the top five for all sixteen races.

Amidst putting together their full-season lineups, DXDT Racing also used the off-season to relocate their operations from Salt Lake City, Utah to Statesville, North Carolina. Located centrally to more North American racetracks than previously, the team will be able to save travel time and resources, freeing up the schedule for further work on development. The new facility boasts 20,000 square feet where DXDT will continue to build the program and hire new staff to reinforce the team’s strong standing in the series.

CrowdStrike, a leader in cyber security, is back for a fourth consecutive season with SRO America as the title sponsor and Official Internet and Cloud Security Provider for SRO’s GT World Challenge America Powered by AWS. In addition, Crowdstrike Racing, the sports marketing branch of the relationship, is renewing its partnership with with DXDT Racing for a third consecutive season, combining the efforts of two great companies to create a winning team.

"DXDT is very excited to continue our relationship with CrowdStrike in 2021," said DXDT Racing owner and driver David Askew. "We are eager to pick up where we left off and looking forward to more wins and hopefully a championship-winning effort. Our mission is to support client racing, and CrowdStrike being a primary focus of our program. DXDT continues to invest in people and equipment with the goal of helping CrowdStrike Racing to win races and championships."

The 2021 season for all three series begins March 5-7 at Sonoma Raceway, and will then take a two-month break before returning to Circuit of the Americas. The rest of the season will see the series visit the rest of the fan-favorite North American road courses: Canadian Tire Motorsport Park, VIRginia International Raceway, Road America, Watkins Glen, and Indianapolis Motor Speedway. 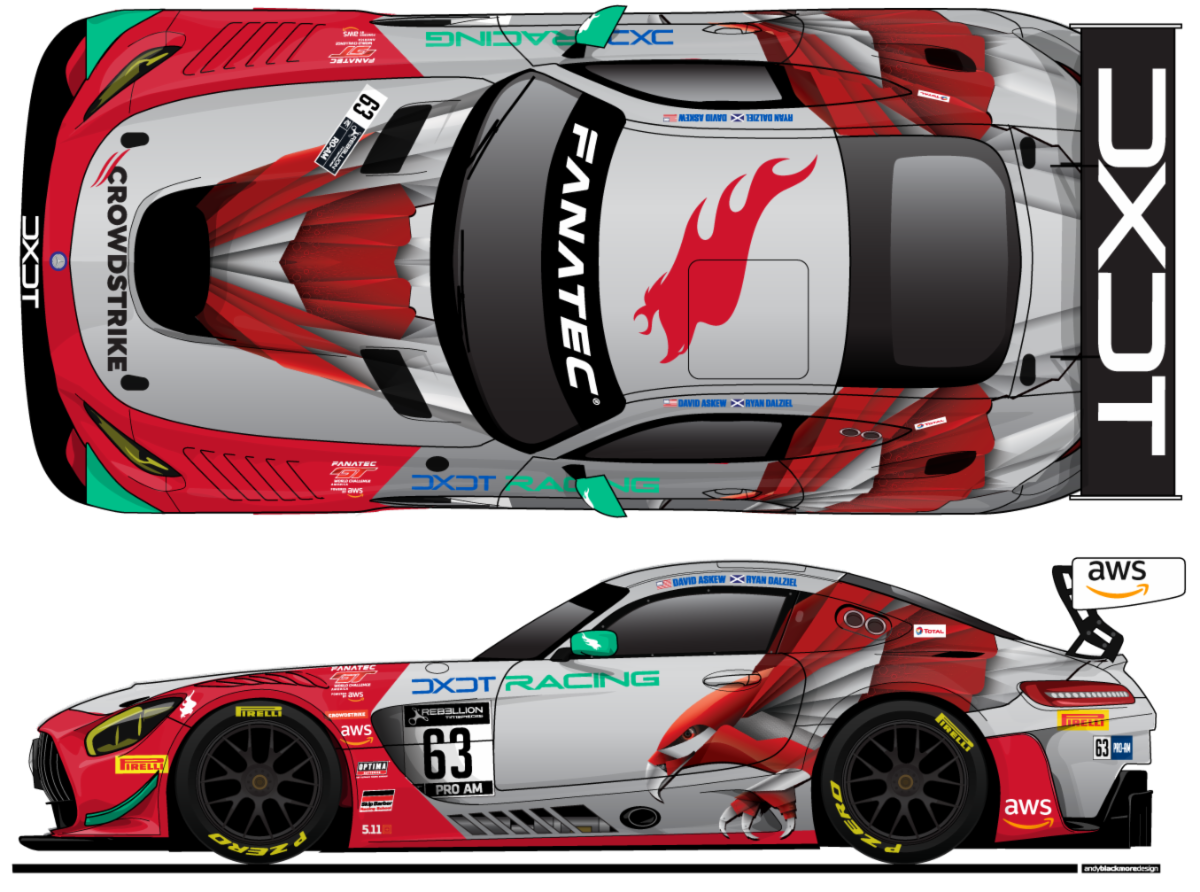 David Askew | Fanatec GT World Challenge America powered by AWS
No. 63 CrowdStrike/ DXDT Racing Mercedes-AMG GT3
DXDT is very excited to get the 2021 season underway. Last year we had breakthrough wins in TCA, TCR and GT America, culminating with a TCA championship and a win at the Indianapolis 8 Hour! We look to build on this success in 2021. In the past few months we've purchased a new race shop in Statesville, NC and moved the entire team into our 20,000 sq. ft. building. There was no off season for us as we’ve been busy testing at Daytona and Sebring. We have a full season test program in place and kick it off at Circuit of the Americas this weekend. The season opener at Sonoma is coming up fast and we plan to hit the ground running!

Ryan Dalziel | Fanatec GT World Challenge America powered by AWS
No. 63 CrowdStrike/DXDT Racing Mercedes-AMG GT3
DXDT Racing and David Askew are like family to me now, so I’m really happy we are continuing on for another season. Throughout a difficult 2020 for everyone, we were able to keep strengthening not only the No. 63 car, but the organization in general. I’m really proud of the brand we have built, which is proven in the new drivers and sponsors we’ve been able to attract for 2021.

George Kurtz | Fanatec GT World Challenge America powered by AWS
No. 04 CrowdStrike/DXDT Racing Mercedes-AMG GT3
The 2020 season was full of challenges but also great accomplishments for everyone at CrowdStrike Racing. I’m excited to continue building on what Colin and I accomplished throughout 2021. Our confidence is at an all-time high, which should mean great things for CrowdStrike this season.

Colin Braun | Fanatec GT World Challenge America powered by AWS
No. 04 CrowdStrike/DXDT Racing Mercedes-AMG GT3
After our successes in 2020, I’m very optimistic about the upcoming season with CrowdStrike Racing and George. In our third season together, the goal is a championship. With the support of CrowdStrike and DXDT Racing, there is no reason we can’t achieve this. CrowdStrike’s mantra in business applies here in racing: Every second counts at the track. 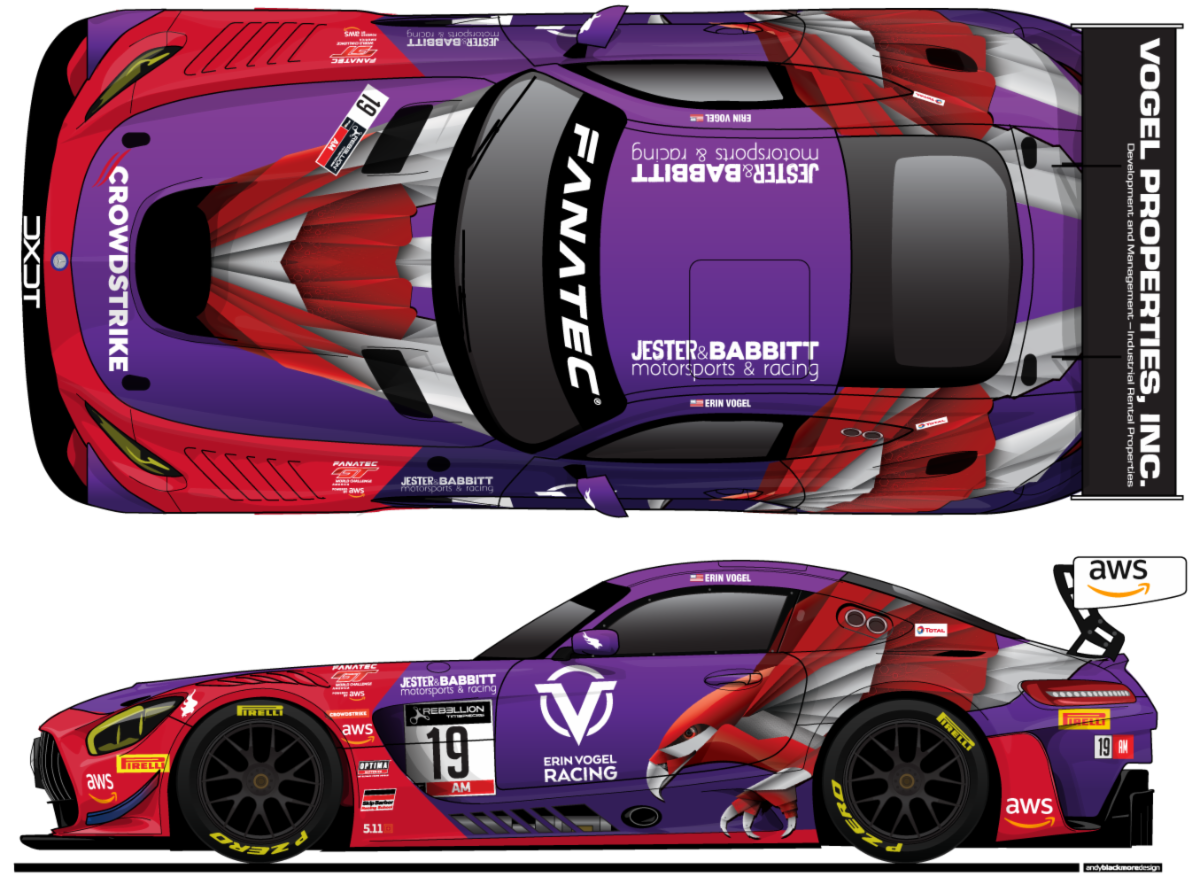 Erin Vogel | Fanatec GT World Challenge America powered by AWS
No. 19 CrowdStrike/DXDT Racing Mercedes-AMG GT3
I'm very excited to make this new turn in my career. It's been my goal for a few years now to race in GT3, and I think this year we've all realized that life is too short to back down from our goals. When the opportunity to work with DXDT Racing came up, I quickly realized that it had the potential to be a great partnership with like-minded people. I'm very fortunate to be able to continue co-driving with Michael Cooper for 2021, and we'll have a few other familiar faces on the engineering, technology, and transportation crew. It's also exciting to get involved with a team that includes a number of other women, both on the management and media side as well as on the driving side. The Mercedes AMG GT3 is an incredibly capable platform that I was able to step right into and be up to speed with quickly, and DXDT has a very extensive testing schedule which will no doubt put us at the top of our game consistently. I'm grateful for this opportunity with DXDT Racing, and I know that as a group we're all excited to show what we can do together.

Michael Cooper |Fanatec GT World Challenge America powered by AWS
No. 19 CrowdStrike/ DXDT Racing Mercedes-AMG GT3
I’m excited to make a return to the GT3 class with DXDT racing. David Askew and Erin Gahagan have done such a great job over the last few years to form a very well-respected team in the paddock.  I’m hoping Erin Vogel and I can add to that and help drive the whole group forward. I believe we’ll be able to fight for class podiums and wins at every event we show up at. We’re testing our #19 Mercedes very soon and I’m looking forward to familiarizing myself with the car.

ABOUT DXDT RACING
DXDT Racing LLC is a high-performance sports car racing team founded by team principal David Askew in 2014 and located in Salt Lake City, Utah. The Team’s primary focus is on GT3 and GT4 racing in North America. The team has fielded cars in various racing series such as SRO’s World Challenge GT America Powered by AWS, IMSA’s Michelin Pilot Challenge, and Lamborghini’s Super Trofeo series. Although the team is young, DXDT is comprised of a group of highly experienced professionals with championship winning backgrounds.

ABOUT CROWDSTRIKE®
CrowdStrike® Inc. (Nasdaq: CRWD), a global cybersecurity leader, is redefining security for the cloud era with an endpoint protection platform built from the ground up to stop breaches. The CrowdStrike Falcon® platform’s single lightweight-agent architecture leverages cloud-scale artificial intelligence (AI) and offers real-time protection and visibility across the enterprise, preventing attacks on endpoints on or off the network. Powered by the proprietary CrowdStrike Threat Graph®, CrowdStrike Falcon correlates over 2.5 trillion endpoint-related events per week in real time from across the globe, fueling one of the world’s most advanced data platforms for security. For more information, visit crowdstrikeracing.com