Nick McMillen survived the chaos to win Round 4 of the GT World Challenge America Esports Series at WeatherTech Raceway Laguna Seca presented by Corteco, while championship leader Michael Kundakcioglu solidified his points lead after an up and down race.

Former GT Academy champion McMillen qualified his Thrustmaster Esports Mercedes-AMG GT3 fifth on the grid in a qualifying session that was dominated by the Egg Motorsports Ferrari 488 GT3 of Philippe Simard.

The Canadian, who took pole by over four tenths of a second ahead of his countryman Nelson Mason, led the field to the green flag only to lose the top spot in the opening sequence of corners to #GTRivals standout Bryan Heitkotter who made an aggressive move to take the lead from third on the grid in his Nissan GT R Nismo GT3.

Further back, Nurburgring race winner and points leader Kundakcioglu had his race go awry on the opening lap. After qualifying a disappointing seventh in the No. 96 Sidemax Motorworks Mercedes-AMG GT3, Kundakcioglu was hit by Haupt Racing Team driver Lukas Müller, dropping him to the back of the field.

Müller, who entered the day just four points behind Kundakcioglu, continued on but was later assessed a drive-through penalty for the contact. He later withdrew from the race and was credited with a 35th place overall finish.

Back at the front, Heitkotter controlled much of the race en route to leading a race-high 26 laps with McMillen, Lucas Müller, and Cody Blanton in hot pursuit.

But the race turned on its head with 20 minutes to go when Dylan Archer and Tadas Liutkus made contact in Turn 5 just in front of the lead pack. Liutkus' BMW M4 GT4 ended up sideways across the track as Heitkotter rounded the corner.

Heitkotter hit the BMW and was slightly delayed in rejoining the race, while McMillen and Müller picked their way through the chaos. The Nissan of Heitkotter lost a further position in lapped traffic minutes later, dropping him to fourth behind McMillen, Müller, and Cody Blanton.

The final shakeup in the running order came when a 15 second post-race penalty was assessed to Lucas Müller for contact with lapped traffic on the 26th lap which dropped him to fourth in the final finishing order, with Dirk Groenveld's BMW M6 GT3 coming home a solid fifth.

Of note, Kundakcioglu managed to recover from his Lap 1 misfortune to notch a seventh place finish, while Troy Barman improved his championship hopes with a sixth place result.

Heading into the season finale at Imola, Kundakcioglu now holds a nine point lead over Barman with Blanton and Simard in a tie for third 15 points back. With his win, McMillen jumps from eighth to fourth in points, 16 behind Kundakcioglu, with Lucas Müller one further point behind in fifth. 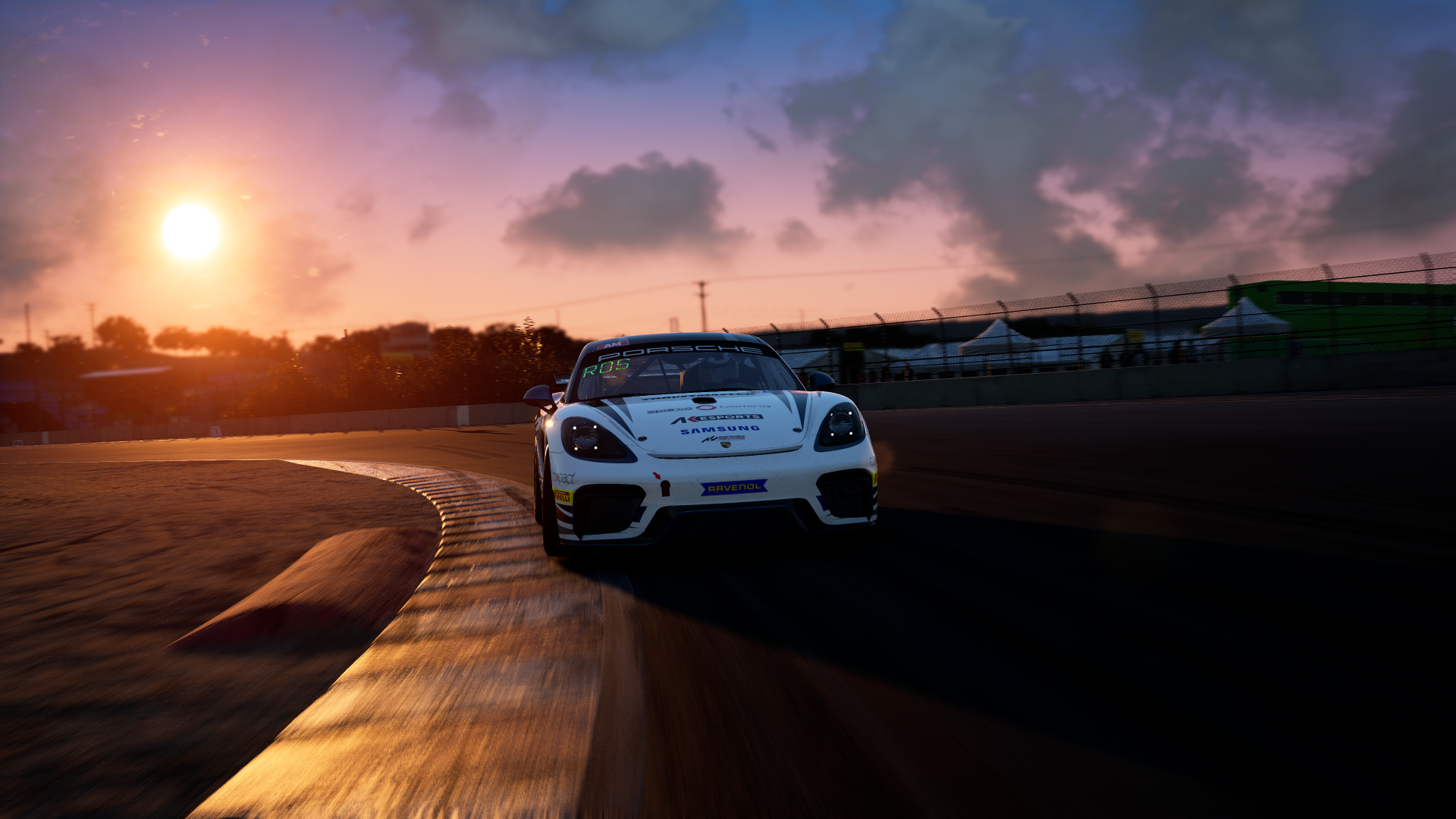 Cavillon scored her fourth-straight GT4 class pole but was unable to convert it into a win due in large part to an incident on the first lap that dropped her to the back of the field.

That allowed Rose to jump to the lead from the outside of the front row in the No. 956 Porsche 718 Cayman GT4. The Australian controlled the race from the front, ultimately fending off Joseph Kostovich's Aston Martin Vantage GT4 to take the win.

Cavillon, meanwhile, put in a remarkable comeback drive to secure the final step of the podium in her Porsche despite a spin with 12 minutes to go while battling for fourth with Juan Reinoso.

Cavillon dove to the inside of Reinoso's Maserati MC GT4 in Turn 6 but ran out of room, causing her to run off track.

The French driver gathered it back up and was able to pass both Reinoso and Takis Weekes in the closing minutes to salvage a third-place result. Reinoso was credited with fourth while Weekes secured a fifth place finish in class.

Caleb John Lavender, who entered the event as Cavillon's closest challenger in points, only managed to complete 3 laps and was credited with a 14th place finish in class which has allowed Cavillon to clinch the GT4 class championship with one round to go.

The final round of the season is scheduled for January 10th at Imola.