Simard had the field of 35 GT3 cars covered in qualifying, scoring pole in his No. 42 Egg Motorsports Ferrari 488 GT3 by 0.363 seconds over the No. 14 Mercedes-AMG GT3 of Hamza Gulzar.

Nevertheless it was Gulzar that got the jump at the start of the race while Simard faded to fourth in the first sequence of corners. Race 1 winner Michael Kundakcioglu slotted into second from third on the grid in his Sidemax Motorworks Mercedes and immediately started to apply pressure on Gulzar for the lead.

That duel, which lasted for the better part of the opening 20 minutes of the race, came to a head on the ninth lap when Kundakciaglu attempted to out brake Gulzar into the first chicane. The two Mercedes went side-by-side until contact knocked Gulzar off track and into the barrier where he suffered significant damage.

Kundakcioglu was able to continue, but was later handed a drive-through penalty for incident responsibility for the contact.

The incident also involved the polesitter Simard who had recovered from a poor start to run third but was tagged by Gulzar's spinning Mercedes. He was able to continue, but the melee provided Cody Blanton and Lucas Müller the opportunity to sneak around.

Moments later, an aggressive lunge from co-points leader Troy Barman on Simard into the second chicane led to a spin from Barman who never would recover. Barman was ultimately credited with a 37th place overall finish.

Meanwhile at the front, Müller and Simard made their way by Blanton and were promoted to first and second when Kundakciaglu was called in to serve the drive through penalty.

The decisive moment came with under 16 minutes when Simard attempted to out brake Müller around the outside into the first chicane. The two cars made contact which sent Müller into a spin, while Simard carried on in the race lead.

After a review, the stewards assessed a 10 second post-race penalty on Simard for the contact and the Canadian was unable to increase his margin over Müller enough to hold on to the win, ultimately handing victory to the German driver by a margin of 1.314 seconds.

Simard was able to secure second spot and GT Rivals champion Bryan Heitkotter drove his No. 5 Forsberg Racing Nissan GT-R Nismo GT3 onto the podium from eighth on the starting grid.

Blanton and Lukas Müller's Mercedes machines completed the top five. Kundakciaglu managed to fight back from his penalty to finish tenth and leaves Monza with a narrow points lead. 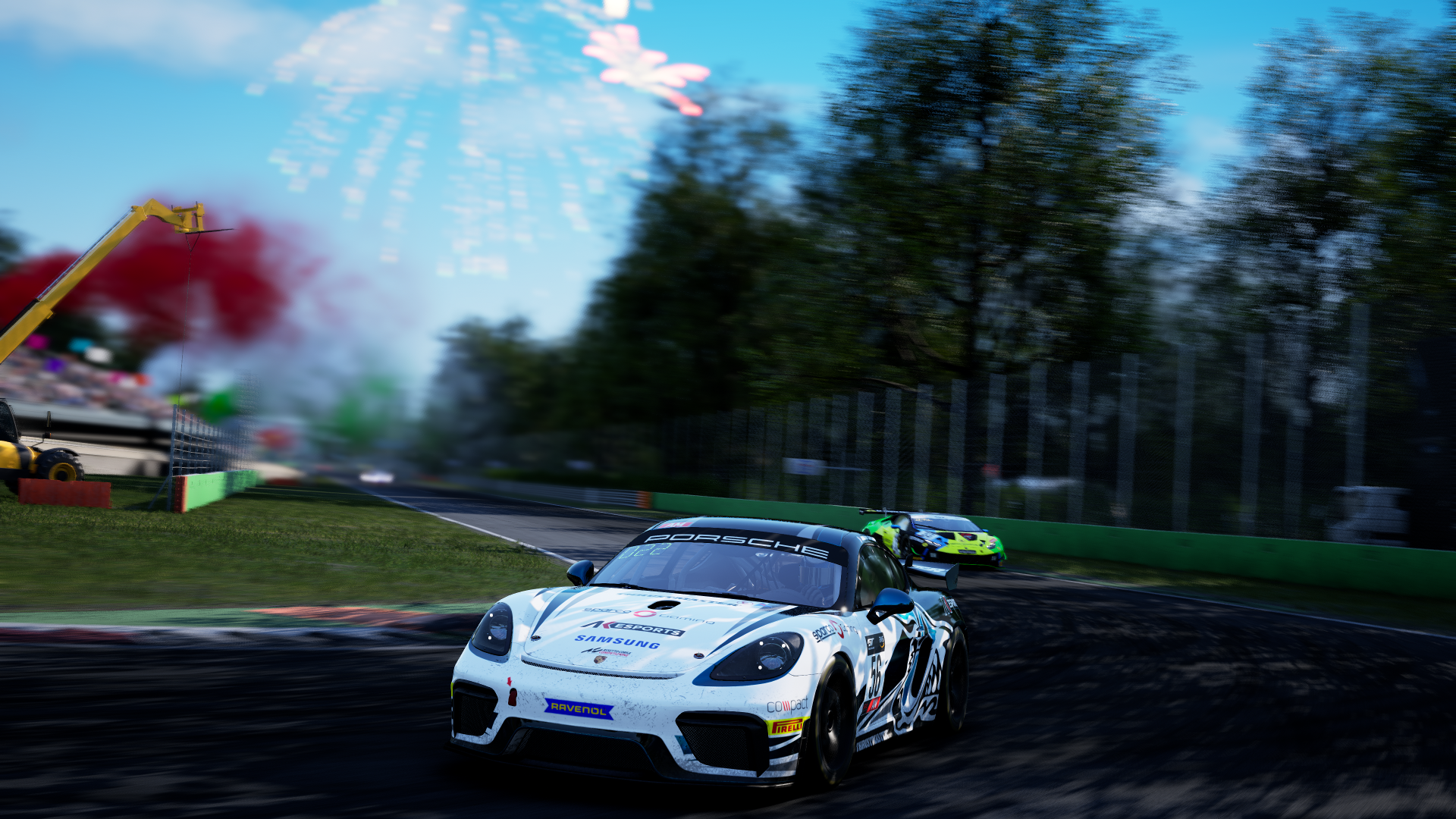 For the third-straight event, the GT4 proceedings were dominated by Aenore Cavillon in the No. 56 Jean Alesi Esports Academy Porsche 718 Cayman GT4.

The French driver qualified on pole by over a second and led every lap en route to her third class victory of the season and fourth triumph if the six-hour non-championship endurance round at Spa-Francorchamps is taken into consideration.

The biggest threat to Cavillon’s triumph came on the second lap when her car made contact with the Mercedes-AMG GT4 of Cameron Sansano in the the first chicane, an incident which also affected Caleb John Lavender.

After recovering, Lavender was able to apply some pressure in the first half of the race but ultimately faded in traffic as the GT3 field cycled through, finishing a distant second in the No. 999 Archer Brothers Esports Audi R8 LMS GT4.

Tadas Liutkus' No. 727 BMW M4 GT4 completed the GT4 podium in third, followed by Sansano and Simon Fisher who had engaged in a thrilling duel for fourth and fifth for much of the event.