Troy Barman conquered Mt. Panorama and a host of challengers to earn his first FCP Euro GT World Challenge America Esports Championship win of the season and draw even in the championship battle.

The victory was anything but straightforward as a massive pileup on the initial green flag that involved nearly the full field prompted the organizers to make a second attempt at the start of the race.

This necessitated a total server reset which wiped out the qualifying times for the race, resulting in a second qualifying session to set the grid once again.

Barman took advantage of the rest by improving from third on the initial grid to taking the second starting spot in the revamped order in his Mercedes-AMG GT3.

Nurburgring winner Michael Kundakcioglu, meanwhile, dropped to fifth for the restart attempt after previously locking down the pole and getting a clean start on the first green flag.

Round 1 polesitter Philippe Simard, who also took pole for the six hour non-championship race at Spa-Francorchamps last week, reprised his role with an impressive 1:59.916 lap in the No. 42 Ferrari 488 GT3. Simard was the only driver to break the two minute barrier in the event.

The second attempt at a start was much cleaner and it saw Barman grab the lead in the darkness on the opening lap through Griffin's Bend and extend it to over two seconds as the sun came up.

Former TC America champion Tom O'Gorman charged early to move up to second from third on the grid in the No. 94 Acura NSX GT3 Evo, but made contact with Simard while fighting for the runner up position amidst GT4 traffic.

The bump, which O'Gorman was later given a five-second post-race penalty for, knocked Simard's Ferrari in the wall and ultimately out of contention with significant damage, but O'Gorman was able to continue on and ultimately take the lead on track in the second half of the race.

Barman appeared content to run just behind O'Gorman, safe in the knowledge that as long as he was within five seconds of the leader he would be promoted to the top spot by virtue of the penalty, but ultimately made the pass for the lead on track in the final minutes.

O'Gorman then appeared to lose pace, allowing Kundakcioglu up into second on the road where he would finish 0.407 seconds in arrears. Kundakcioglu and Barman leave the event tied on points with a win and a second place each through two rounds.

Lukas Müeller completed the podium in third in the No. 3 Mercedes-AMG but 19.011 seconds down the road from the leader, while O'Gorman salvaged fourth despite the late-race drama. 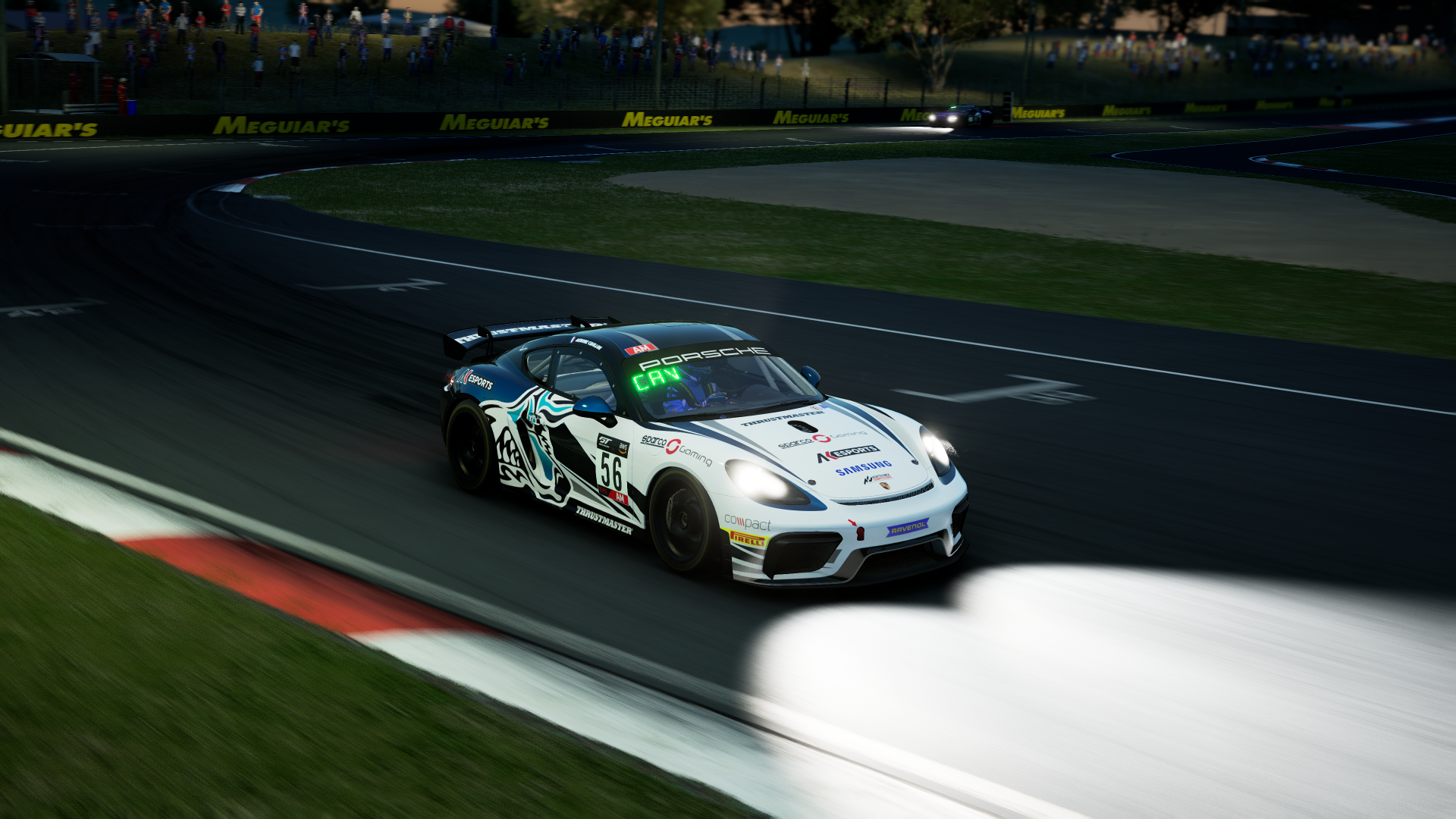 The GT4 class for sim racers who qualified to participate, was won by Aenore Cavillon in the No. 56 Porsche 718 Cayman GT4 Clubsport. It was the second straight win in the championship for Cavillon.

Caleb John Lavender had a strong run to second place in his Audi R8 LMS GT4. After jumping to fourth on the opening lap, Lavender moved up to third in class following an off track moment by Simon Fisher early in the going.

After fending off a strong challenge from Tadas Liutkus for much of the race, Lavender took advantage from a miscue by Ludovick Daoust to move into second with ten minutes to go.

Round 3 of the FCP Euro GT World Challenge America Esports Championship now sets its sights to Italy. Sim racers will gear up for a 60-min sprint feature on the famed Autodromo Nazionale di Monza on Sunday, December 6th at 3pm EST.