The DXDT Racing Mercedes-AMG team of David Askew and Ryan Dalziel finished fourth overall and second in Pro/Am, while the Squadra Corse Ferrari 488 team Martin Fuentes and Rodrigo Baptista finished 5th overall and third in Pro/Am. The Am division Wright Motorsports Porsche 911 team of Fred Poordad and Max Root finished sixth overall and first in Am.

From pole, Dalziel, in the #63 Mercedes-AMG GT3 brought the field to the green and alongside him Hindman, in #93 Racers Edge Motorsports Acura NSX GT3 timed the flick of the starter's hand to perfection getting the jump and drag racing ahead into the lead through turn 1. Root, in the #20 Porsche 911 GT3 R (991.II) also swung by and up into second dropping Dalziel into third after the first turn of the race.

At the 45-minute mark of the contest, the pit window opened, and Ward was first in to changeover to Dontje. Braun followed to hand the reins to Kurtz, with Baptista coming in behind him to hand over to Fuentes. Hindman, Root and Dalziel all came up pit road just before the 10-minute window closed.

With the window closed, and the recycling of the charts, Blackstock emerged with a 12.5 second lead, Poordad, who took over for Root, continued in second, Askew (Dalziel) third, Kurtz fourth, Dontje fifth and Fuentes sixth. 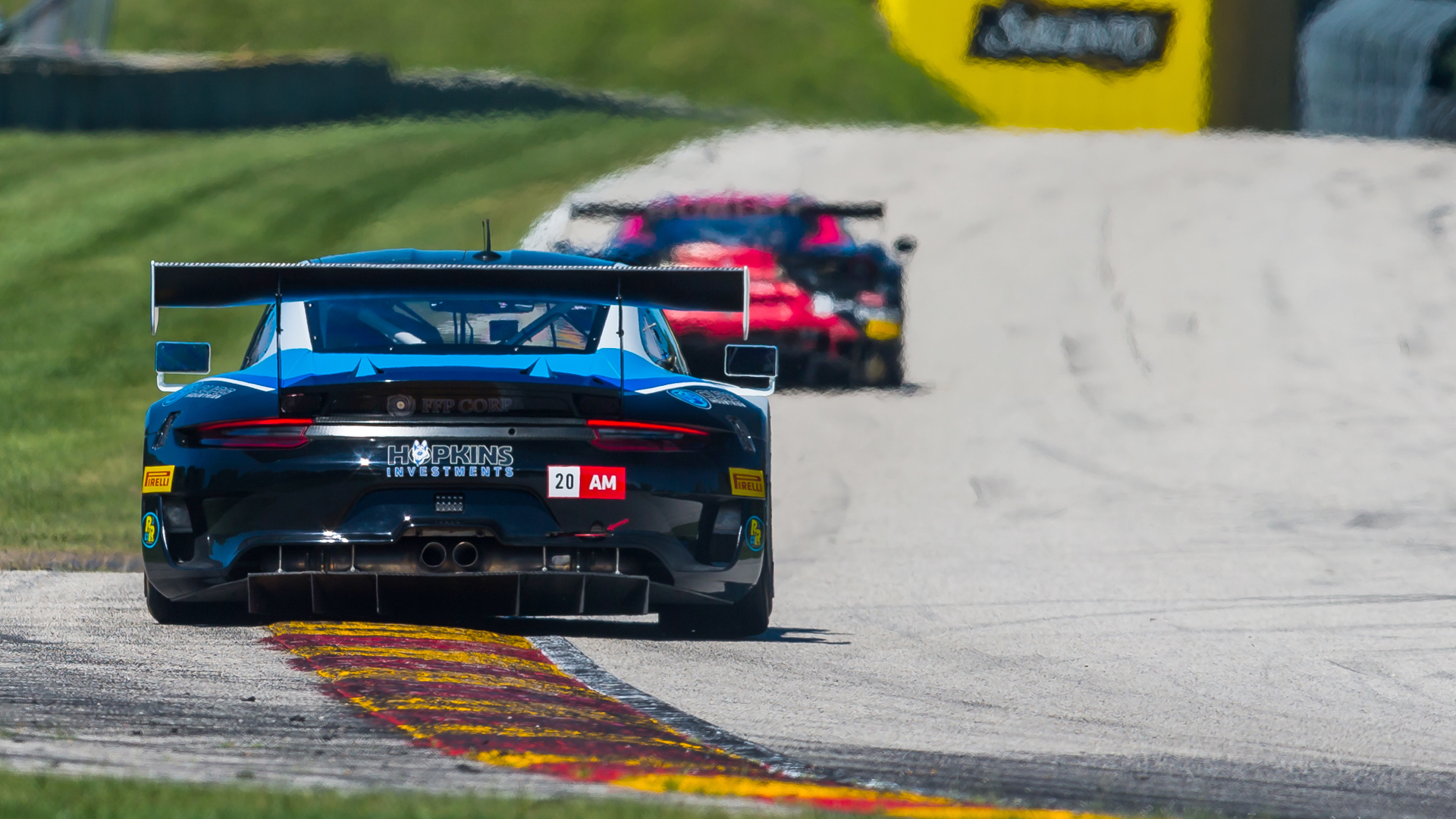 By lap 26, Askew closed on Poordad and began a challenge for second. As the two battled, Kurtz closed on Askew. On lap 27, Askew would run wide through turn 6 allowing Kurtz to squeeze by. A hard charging Dontje then closed on Askew and a four-car battle ensued. The driver of the #33 would then execute a pass on Askew into turn 5 and a lap later pull the same move on Kurtz to move up into third overall. Dontje then squeezed by Poordad through the Kink and up into second overall. Kurtz also squeezed by moving up into third overall. Poordad had lost his momentum and Askew swung by the Porsche pilot through turn 14. Then with under 10 minutes left on the clock, a hard charging Fuentes closed on Poordad and on lap 38 passed through turn 1.

At the checkered, Blackstock crossed the line 21 seconds ahead of Dontje. With the Pro/Am division win, Kurtz and Braun take a one-point lead in the championship over Fuentes and Baptista.

"I definitely took advantage of the bottom end torque that this Acura NSX GT3 has," said Hindman on grabbing the lead at the drop of the green flag. "The big thing was just watching when the green flag came out. I got the jump. I saw the starter's hand move a little bit quicker I think and just rolled from there."

"It wasn't our day yesterday and we regrouped," said Kurtz. "We just executed really well, and we had speed all weekend and at least we were able to redeem ourselves on Sunday. A great run by Colin and great job by the entire team."

Results are provisional until posted final. GT World Challenge teams and drivers now look ahead to Rounds 9 and 10 of the 2020 championship scheduled for September 18-20 at Circuit of the Americas in Austin, Texas.