Past teammates, Martin Barkey and Kyle Marcelli reunited in 2019 for the GT World Challenge America powered by AWS Pro-Am Championship. The duo won the Pro-Am Drivers' Championship title and are back to defend a championship for the 2020 season in the #80 Racers Edge Motorsports Acura NSX GT3 Evo. Learn more about Martin and Kyle both in this week's Driver Download. 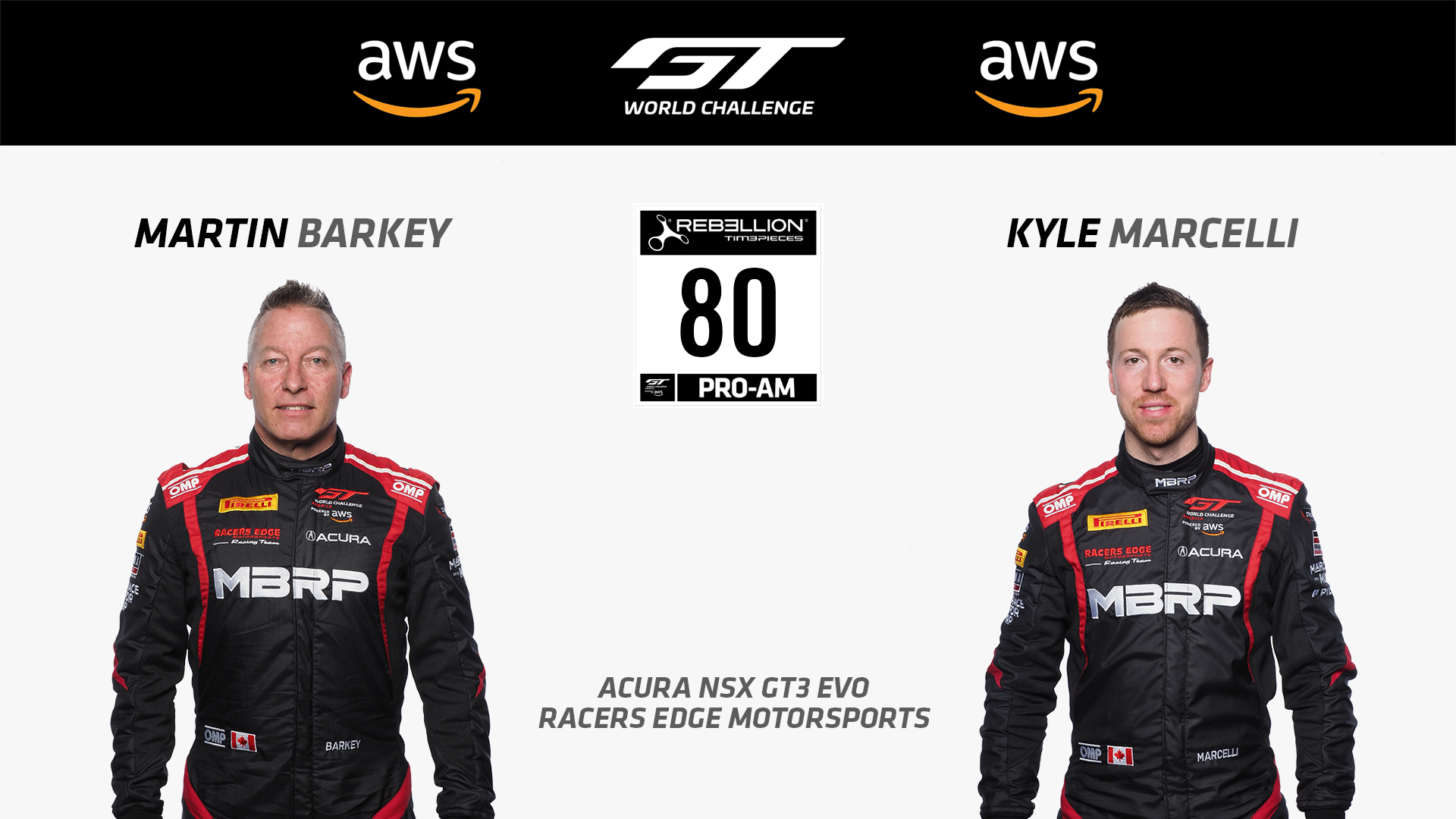 How was the season opener at COTA?
Martin: It was not the race we were expecting – we were hoping for a better finish as we were in contention in the final part of the race when we were taken out in a crossover move from a competitor.  We are looking forward to getting back in the car, and pushing hard at VIR, as it has been far too long away from the track and the team.

Kyle: COTA was OK. Certainly not the start to the season that we had in 2019. But, a respectable start that puts us in contention for the championship. We showed competitive speed fighting for the pole in the tricky Q2 qualifying conditions. We had some good fights and overtakes in the first stint of R1 and good race pace (closing 18-seconds to the P3 Ferrari in the second stint of R1) netting a P4. In R2, we took the Pro-Am lead in the first stint and looked to be in good shape after a super pit-stop to maintain the class lead. Unfortunately, a caution bunched the field, and some restart drama caused damage to our car and ultimately an extra pit-stop netting us a P5.

How did you get into racing?
Martin: I enjoy the thrill of acceleration and competition; car control and racecraft is something that you continuously learn – I started with participating in track days in a Dodge Viper, then I began racing in a regional series in Ontario and Quebec.  And when I met Kyle Marcelli at Mosport, we teamed up to race in my first professional race series in 2014

Kyle: As a young kid, I loved to drive anything and everything. I drove my 50cc dirt bike, my dads snowmobiles, and my grandfathers car (on his lap of course). My two uncles raced (one motorcycle and the other dirt bike). It was my uncle Mike (the motorcycle racer) that first took me to the rental go-kart track, and I was hooked! He and I talked to my father and asked his permission to get me a professional go-kart and he agreed. I spent a summer driving the kart at my school parking lot, then finally in 2000, at age 10 I debuted in my first race! We finished 2nd. And, the rest is what lead to the present.

What is your favorite racing memory?
Martin: Last year there were two, first win in GT3 at COTA 2019 and then the end of the season winning the Championship with Kyle. And I suppose I also need to say, that having my family coming to races as often as they do is a treasured memory.

Kyle: I am grateful to have many good racing memories to date. One favorite memory that stands out is Mid-Ohio (2018). I won the IMSA Michelin Pilot Challenge race on Saturday, then won the IMSA WeatherTech SportsCar race on Sunday! It was a career highlight weekend for sure.

What’s the story behind your helmet design?
Martin: My corporate colours, Red white and black.

Kyle: Unfortunately, there was no inspiration or story behind my original helmet design. However, I have maintained the same lines (only with minor modifications) since my first helmet. Recently, I incorporated a collage of images of my Uncle Mike into my helmet design, it came out really well! As I noted earlier, he was largely responsible for getting me into the sport and I admired him a lot. In March of 2016, we suddenly lost him in a race car accident. My helmet now serves as a tribute to him.

Something interesting about you or a hidden talent?
Martin: I have my drivers license memorized

Kyle: I am deathly afraid of snakes

If you could invite 3 people to dinner who would it be and why?
Martin: Jesus – so many questions to ask him, my grandfather – to hear about and appreciate his life and learn about my father as a teenager and my four year old grandson Jude, he has immense interest in racing and cars and we can talk for hours about both.

Kyle: I would invite; 1. My Grandfather – I miss listening to his stories and words of wisdom. 2. Mark Wahlberg – I’m a big fan of his acting work. 3. Niki Lauda – He seemed like a true racer, not only was a championship, but truly seemed to love the sport. And, 4. (Bonus) Jimmy Fallon – Everyone needs a laugh a dinner and who doesn’t like Jimmy Fallon.

Martin, what’s it like to have MBRP on the side of your car and be able to represent a business that you’ve put a lot of work into?

It is really exciting to be able to race with MBRP on the car – to be in the automotive industry and have the racing align with our vision of being a leader in the industry.  I am blessed to have both my passion for business and for racing come together at this stage in my life and at a world class level.

Kyle, tell us the background story about your merchandise, Marcelli Mob.

The brand was originally proposed to me by my good friend Graeme. He came up with the name and logo, I liked it, then together we kind of ran with it. Marcelli Mob is simply a merchandise line for my fans and the community of motorsport enthusiasts. We currently offer a Hat, T-Shirt and Hoodie, and will consider additional “track day” essentials in the coming months. We have a slightly revised logo that will be released soon as well, that embodies a slightly more vintage race vibe. Check out MarcelliMob.com to learn more! 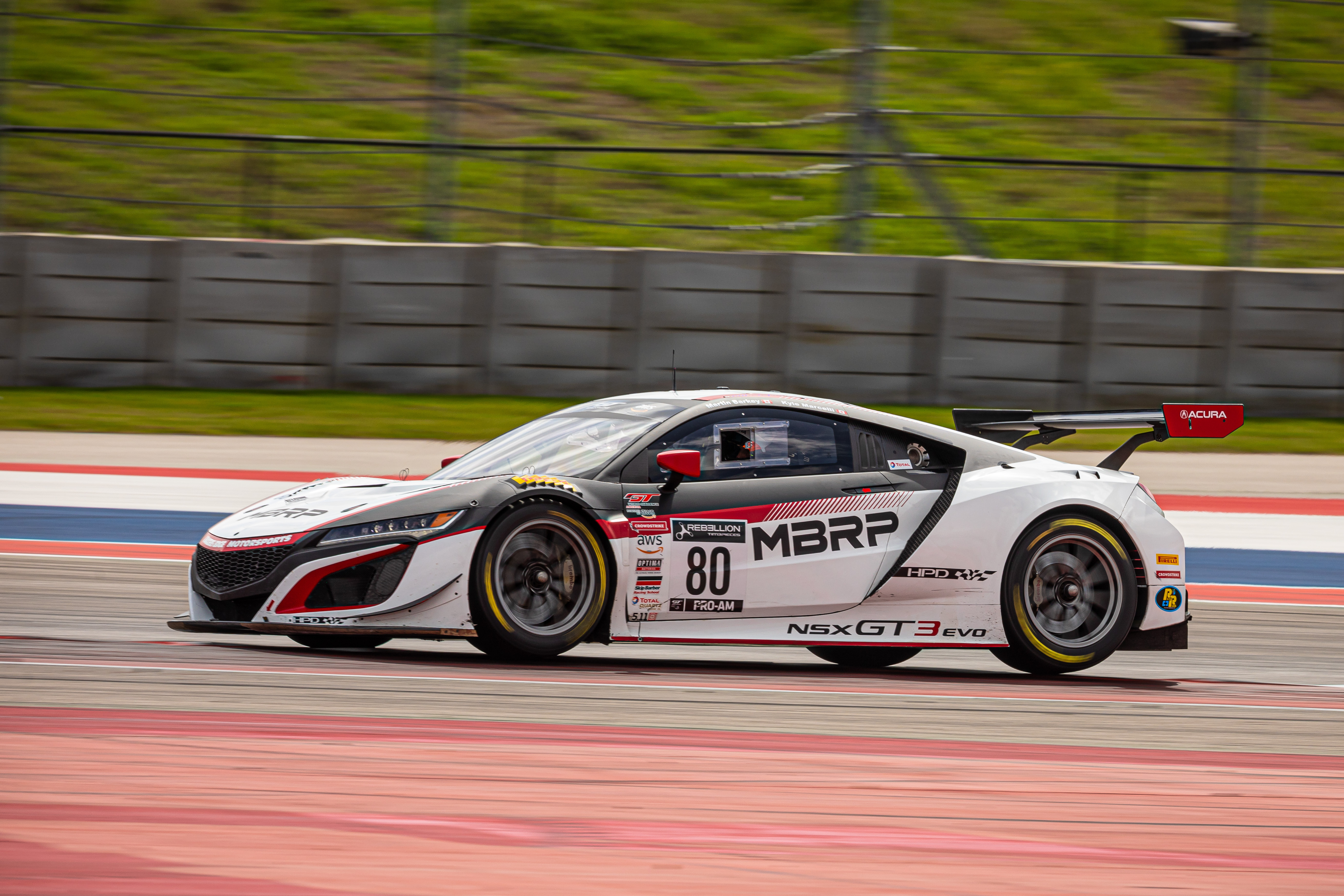