With two rounds down, SRO America’s GT Rivals Esports Invitational heads to the South of France where real world pro drivers and sim racers will take on Circuit Paul Ricard in Assetto Corsa Competizione. First opened in 1970 near the village of Le Castellet, the track's most famous feature is the long Mistral straight. Named after the wind that blows from southern France into the Mediterranean, it stretches to 1.8 km (1.1 miles) and will see GT World Challenge drivers reach top speeds in excess of 290km (180mph).

Nissan and Audi have both tasted victory, but eight other manufacturers look for glory. Entries from Aston Martin, Audi, Bentley, BMW, Ferrari, Honda, Lamborghini, Mercedes-AMG, Nissan, and Porsche make up the 33-car grid. With the real world pros also becoming more acquainted with the Assetto Corsa Competizione sim, competition should be closer than ever throughout the field.

Bryan Heitkotter continues to be a leading contender driving the Nissan GT-R GT3. The Laguna Seca winner managed a Top 5 finish at Misano after damaging his car. Kenton Koch returns in the Aston Martin V8 Vantage GT3 seeking redemption after a disappointing Misano round. Same goes for early-favorite Karl Wittmer, who made the switch to the Honda NSX GT3 Evo but was limited in Misano due to an early drive-thru penalty.

IMSA’s Paul Miller Racing driver Corey Lewis joins the fun, competing in the Lamborghini Huracan GT3 Evo like his real world racer. Plus, the Canadian Nelson Mason who’s raced in the World Series Formula V8 3.5 championship will also take to the track in a Lamborghini. They’ll join Nicolai Elghanayan who’s made the switch to Lamborghini machinery ahead of Round 3.

Round 3 at Circuit Paul Ricard will feature our first race under the lights, with the event taking place after sunset. Brining a new element to the GT Rivals series to challenge drivers and showcase another dimension of sports car racing.

Tune-in this Sunday at 3pm ET on SRO channels to catch all the action. Don’t miss out on our exclusive giveaways! This week will feature an ASUS TUF Gaming A15 laptop as well as a one-day Skip Barber Racing School. 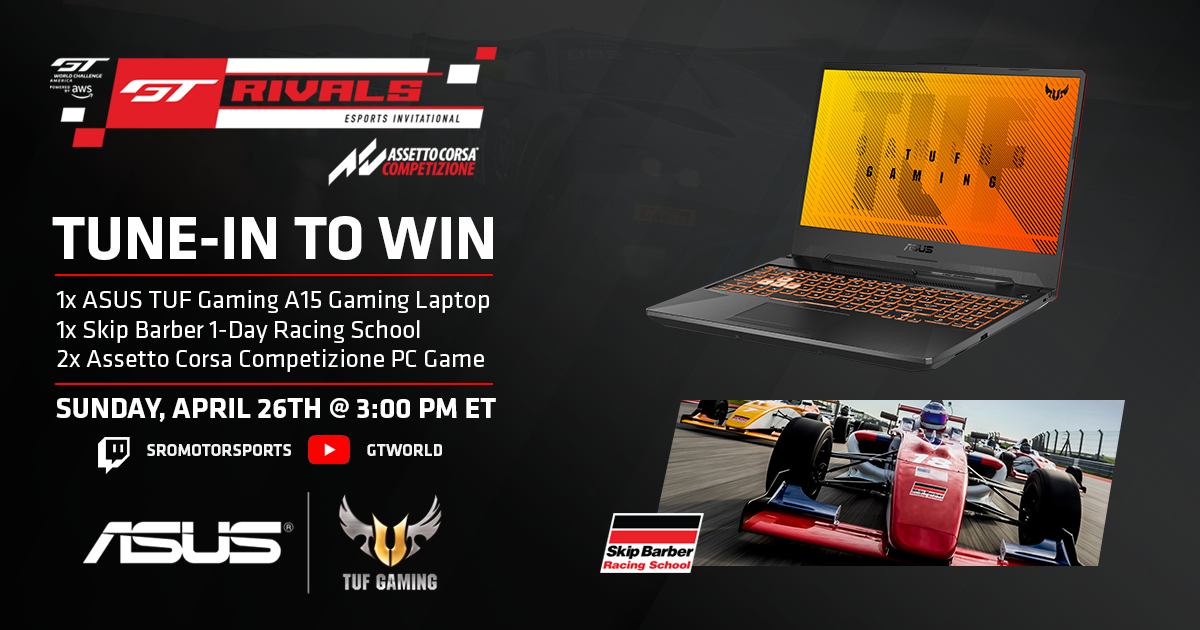